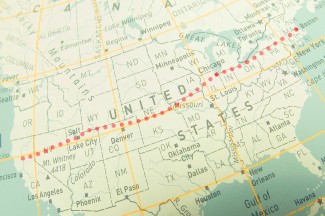 Andy and I just finished a couple months of serious discernment. In less than a week, we’ll be moving from Massachusetts to California. And while we can say that with much joy and excitement now, the process itself was really difficult. It taught me a lot about the vow of obedience in marriage that Andy reflected on in his last post. But far from trying to romanticize this vow, I want to be very honest: obedience can get pretty darn dicey for two stubborn, independent people.

Andy finished graduate school in May, and so we knew that if we wanted to transition, now was the time. We started our process being entirely open. We thought it was a great idea to send our resumes out all across the country. It seemed so fun and adventurous until I came home and heard Andy talk enthusiastically about a job he had applied to that day in the middle of nowhere. I started to realize that my sense of adventure had some parameters. We narrowed our search to the West Coast.

We were incredibly fortunate when our search quickly bore fruit and we had three potential job offers — one for Andy, two for me, but in three totally different locations. The daydreaming ended and the reality of discernment began.

We were coming from different perspectives: Andy was about to graduate and wanted the opportunity to choose a job he was excited about rather than risking a move for my job and being limited with whatever was available. I, on the other hand, am three years out of graduate school and wanted my next move to offer me a greater challenge and a step up from my current role. Overly cautious to gender stereotypes, I also had a great fear of moving for my husband and my professional life taking a back seat. I had friends and family on both sides of the issue, reminding me that it’s too easy for a woman to concede or that it’s noble to sacrifice your own career at times for the other. How can I both be a strong, independent feminist, and obedient to my marriage and husband at the same time?

The anxieties were exacerbated by the reality that Andy and I have chosen career paths not for the lucrative paychecks, but because we feel called to ministry. That makes moving on one salary rather risky. We also know that we want to have children, and so questions about where that will happen, how financially ready we’ll be, and who will be the primary caretaker also surfaced.

There were a few weeks when every conversation we had revolved around this discernment. And it was made more difficult because all of these conversations happened over the phone. I was leading a retreat, traveling for an interview, and on vacation with my mom and sisters-in-law at the same time we were supposed to make a decision.

Despite the lack of external progress, the process led us deeper into understanding one another. We said all that needed to be said — both real and imaginary fears. Andy heard all of my fears about gender roles and expectations and took it like the feminist champ that he is. I just needed to say it, to get it out so he could know what I was struggling with. And he, too, needed to share all that was building up in his heart.

After all of the buildup, our final decision was incredibly easy. Andy and I were both offered jobs within two days of each other in the same area — a location we never planned for, but feel incredibly excited about the opportunity. The easy outcome could have made us resent the difficult process we went through, but actually, I’m incredibly grateful for the tense, tear-filled, emotionally raw conversations. At its root, obedience in marriage does not mean blind obedience or passive submission. Obedience means listening. And Andy and I did a lot of listening over the last few months. The decision to listen to each other was the most important decision we could have made. The decision to move to California is simply a wonderful product of that first, more primal decision in our vocation of marriage. We’ll arrive in California just a few days after our one-year anniversary. Who knows what challenges and graces year #2 will bring?