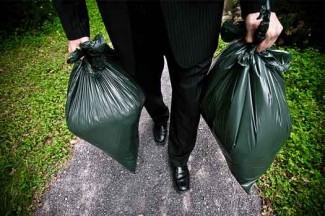 The thought had been percolating in my mind for a few months. Taking a year off from working seemed — at first — a little too far-fetched and perhaps a wee bit improbable. But as often happens, the universe listens to our whispered dreams and sends us just what we need.

New Year’s Day 2011, the universe sent me Nina Yau’s audio book Minimalist Freedom. I first heard of Nina when she decided to wear the same outfit to her corporate-America job for seven straight weeks to see if anyone would notice. Only one person did. Shortly thereafter she left her corporate job to live out her dream of being a writer.

My dream was to travel. For a year. Visit friends. Talk to strangers. Do a work-exchange. Walk the Camino. But I had a full life. And a couple jobs. And what would I do with my apartment and my stuff?

I followed Nina’s blog as she shed her belongings and her old life. I was inspired and jumped at the chance to download her audiobook. I can honestly say that listening to that book propelled me forward — making my dream of “a year off” a reality six months later.

I would love to share the book with you. As well as her posts about wearing the same outfit for seven weeks. But I can’t. Nina Yau has done something I thought a bit drastic at first: She deleted her old writings from her blog. Gone. You can’t find them anymore. (Well, maybe some super-technie person could, but me — a commoner — was not able to.)

So I wondered recently: What parts of my past am I holding on to? Which would I be okay letting go?

I think of a dresser drawer filled with writings from the past few years. Why am I holding on to all those papers covered with ink and pencil? I write three pages every morning to clear my head. Most of those pages I wish to never appear in front of someone else’s eyes. If that’s the case, I should burn them. But I won’t. There might be something good in there …

I started a blog three-and-a-half years ago. Could I delete it all? I don’t think so. I’m still quite attached to my old thoughts and ideas. To my old self perhaps. I, like many, have been guilty of holding on to physical objects longer than necessary. That crochet project I may finish one day. That gift from an ex. More candles than I will ever light in my lifetime.

Though Nina’s book is not around anymore, I will tell you this: it was about letting go. On that New Year’s Day it was listening to her that inspired me to open the door of a rarely used closet. I pulled apart all my unfinished crochet projects, rolled up the yarn, and donated it to a local elementary school. Over the next few months I would rid myself of anything given to me by an ex of any sort. And those candles? They were given to two friends who enjoy candlelit baths much more often than I do.

Physically letting go, I find, is quite freeing. It’s not just the “stuff” that we part with. But the guilt as well. Guilt over never finishing that project. Guilt over that failed relationship. Guilt of feeling that I must hold on to candles gifted to me that I will never use.

But my writing. That I am not ready to let go of yet. Though I do have another closet that could use a little purging.

What are you ready to let go of — physically or otherwise? What do you still wish to hold on to?