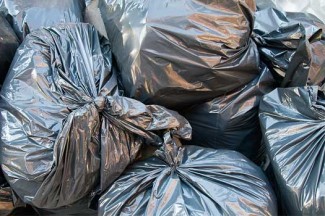 I come from a family that shows its love through gift giving. I think this stems from La Lupe. She raised eight kids on the most meager of salaries, so now that everyone is grown and she has more discretionary money, she loves to buy gifts for people. It’s her love language. Some people are very affectionate, some write notes, some vocally proclaim their love. La Lupe does it by loading you up with tortillas, dried chiles, and cookies every time you leave her house. And occasionally you’ll get all this in the mail.

This character quirk of La Lupe has rubbed off on most other people in our family. They love to give us (especially our girls) gifts.

I understand this is not a bad problem to have. Oh, I never have to buy my children toys or clothes because someone in my family is always giving us something, woe to me. No, I know this is a blessing especially since we don’t have much discretionary income. But it does leave us with the problem of having a lot of stuff. There is no way to have a simple home if you have lots of stuff.

After a while, we had so much stuff for the girls, it became an ordeal to pick out clothes in the morning. There were just so many options that Olivia and I inevitably had a big fight over what she was going to wear because she would take so darn long to pick it. And then I started getting furious over how many toys we had strewn across our living room floor. The girls didn’t even play with the toys anymore. They would just go bin to bin pulling everything out and then move on to the next.

There was too much stuff. We couldn’t appreciate or focus on any one thing because there were too many things. We needed to pare down.

I came across the 40 bags in 40 days challenge. For every day in Lent, you fill up a bag (be it grocery bag or trash bag) with things to give away or throw away. If you do one bag a day, at the end of Lent you will have purged the clutter and found yourself in a simpler home. It sounded like just the ticket. We had so much unnecessary stuff around that it was beginning to get suffocating. We needed to purge.

It’s amazing how much getting rid of stuff helps you mentally, emotionally, and spiritually. And not to mention practically. Without noticing it, “stuff” became this subconscious preoccupation.

We’re not done with the 40 bags but I was anxious to get some of it out of the house. I took it to a local shelter for abused women and children. We filled up a one of those big industrial laundry bins to the point that it was overflowing. Whoa. Its contents accumulated in only the last four years of marriage. And it wasn’t even everything.

Jesus made a point of telling us to build up our treasure in heaven and not on earth. Treasure on earth is not worth much to us so we should routinely part with it, if anything to show that it has no mastery over us. Stuff isn’t in and of itself bad, it’s just that we need to be detached from it. Even though we’re not big on buying stuff, those around us are and we just need to be flexible with that. We don’t strip our children of every toy and leave them with socks to play with, but we strive to keep their world simple and teach them detachment as well as practice it ourselves. So we’re continuing our quest toward a more simple home focused on the necessary and important.