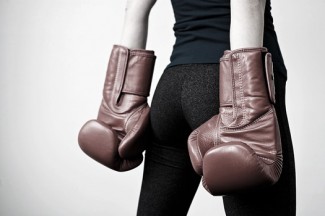 At Notre Dame, I was lucky enough to take some art classes. I love art and these were some of my favorite classes. In fact, I loved these art classes so much you would have thought that I should have been an art major. But I was too scared to put that side of me on display. After we finished each assignment, we would go student by student and critique one another’s work. Even though people were only commenting on my drawing of some fruit, on the inside I felt like they were critiquing how I looked in a swimsuit. I was dying on the inside. I couldn’t handle any kind of criticism of my art. I felt too naked, too vulnerable.

I couldn’t even handle it when my professor was offering individual advice as we worked. I loved painting so much but since I couldn’t get over my insecurity and self-consciousness, I couldn’t learn from our really talented professors. Every piece of advice felt like they were telling me I was awful and should give up. To try and cope with these feelings, I would put on my best shy smile and hope that the professor would cut me some slack. And it worked. I took three art classes at Notre Dame, and I was able to convince my professors that I was too fragile for honest criticism. I was too shy, too meek, and my smile was too cute to criticize.

When I moved to Austin, I hadn’t painted anything in a couple years and missed it. I lived near a community center that offered painting classes, so I dug out my art box and signed up for classes. I was so excited to start painting again that I forgot how much I hated people commenting on my work. On the first day of class, the teacher just had us jump right in and start painting a rocking horse so he could see what level everyone was at. I was being really timid and was painting really slowly because I was nervous of doing a bad job. The teacher came around and I resumed my act and offered a shy smile and a shrug in the direction of my painting. My teacher was having none of it. He immediately told me, “Stop being precious. You can’t be precious when you’re painting. You have to just get in there and cover the whole canvas as quickly as possible and then start building the details. There’s no room for being precious. You just have to be bold.” And he moved on to the next person.

I don’t know if my mouth actually dropped but I felt like it was hanging wide open in shock. He totally called me out and was spot on with his assessment of what I was doing. I was too scared to mess up so I was holding back and putting on an act of false humility. He hit the nail on the head.

His statement — stop being precious — has colored pretty much everything I’ve done since then. Whenever I’m leading a meeting or talking to a group of students, I know being precious won’t get me anywhere. I’ve got to be bold and confident because there is no reason for someone to care about what I’m saying if it is not clear that I believe in what I’m saying. “Being precious” was my way of giving something a mediocre shot. If I didn’t try hard then I didn’t have to feel too bad if I failed. If I tried my best and still failed, I was too scared of what would happen if I found out my best wasn’t good enough. What a cop out.

After this incident with my art teacher, I slowly started to realize that many people did the same thing. Once when I was helping lead a retreat for some college students, I listened as a girl I knew gave one of the talks. I was excited to hear what she had to say. She was awesome — a strong woman and a good role model. She did a lot of social justice work, was kind to everyone she met, was really smart, and was such a faithful person. But when she stood up there in front of the retreat, she hid all of that. Her usual strong and confident voice shrunk and became wispy and cutesy. Instead of standing and throwing back her shoulders, she pulled up a table and sat cross-legged and hunched over as she talked. I had never seen this side of her before. I wanted to yell across the room, “Stop being precious!”

Don’t get me wrong, I can understand fear of speaking to crowds, but at a certain point you have to learn to throw caution to the wind. You have to give everything you’ve got. Especially if it is what you are passionate about. It’s not easy. I still struggle with it daily when I have to meet with big groups of students or parents or even my colleagues. But when I feel myself starting to shrink in fear, I tell myself to stop being precious and try to wear my confidence instead. It doesn’t always work. Sometimes I slip back into the shy smile and squeaky voice, but at least now I know my propensity to do it.

I think a lot of women struggle with this. For some reason, being confident and bold seems to come a bit easier for men. But after working with teenage girls for a while, I’ve come to realize how much they need strong female role models. So much of our culture still teaches them that girls should be seen and not heard, that women should be noticed for their sex appeal and not for their intelligence. And even though it would be great to have more strong women at the highest levels of our society as heads of state or CEOs, it’s not just these women that should believe in themselves and have confidence. A stay-at-home mom can have just as much impact by leading the soccer team or running the soup kitchen at church.

I’m indebted to my art teacher for the kick in the pants. He taught me a great lesson. One that I hope to pass on to my kids and others that pass my way. Being shy, humble, and soft-spoken are not bad characteristics, but faking these because I was too scared to be me hid my true potential.

Who’s with me in taking up the “Stop being precious” banner?