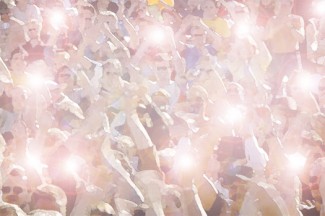 “Music gives a soul to the universe, wings to the mind, flight to the imagination
and life to everything.” — Plato

Live music has always been an important part of our summers. It began when my wife and I were college students in Nashville. We would throw our bags in the car and head up Interstate 65 at a moment’s notice to see an Over the Rhine concert in Clifton, head north to Chicago for a U2 show, travel south to Atlanta to see Pearl Jam, Oasis or REM, and follow our friend Bill Mallonee and his Vigilantes of Love just about anywhere within a 500-mile radius.

I have always found a sense of freedom and wonder in chasing the horizon over open roads; it shouldn’t come as a surprise that I wrote a book about God’s nomadic nature called Holy Nomad.

Today, even with four kids and a world of responsibility, summer means we head out like Jack Kerouac and friends (er, ok, so, maybe more like Clark Griswold and company), en route to sonic bliss. Some of the details are different — our road trip soundtracks that used to begin with John Cusack-High Fidelity-style mix tapes and later transitioned to CDs are now cleverly named playlists on a device — but the spirit is just the same. Our family vacations are very important and we wouldn’t trade anything in the world for the memories we make with our entire crew, but in these musical getaways, just the two of us, we can center ourselves momentarily, hit the reset button, and in the words of singer Jay Farrar, “let the wind take our troubles away.”

It is our summer Sabbath.

This year, our grand musical tour began with our favorite profane Texan and Oscar winner, Ryan Bingham, and moved on to the blissful rhythms of The Lumineers, the punk-rocker turned folk-singer Frank Turner, the Nashville-foot-stomping joyfulness of Shovels and Rope, the Woody Guthrie-esque sounds of Son Volt. And, after a couple more spur of the moment melodious expeditions, our summer of sounds will conclude triumphantly with a Mumford & Sons show in Troy, Ohio, where we will jump up and down and dance along with 20,000 folks crying ecstatically along with Marcus’ every word.

That evening with the Lumineers, in the middle of their most popular song, the band abruptly — stopped playing. Lead singer Wesley Schultz stepped to the microphone and pleaded, “Be here with us now.” He said: “Please put your phones away; just be here with us now.” The band quickly returned to form and charged into the next verse, but no one seemed to actually put away their phone. The truth unveiled in our summer musical expeditions is simply that life happens in the moment.

When I was younger, I was mistaken in believing that each of these little tuneful adventures was about our destination. After all, when friends asked, we would tell them that we were going to Ryman to see this band or to the Taft Theater in Cincinnati to see that one. Dylan might sing to that notion: “I was so much older then; I’m younger than that now.” As my fourth decade has inched its way into my reluctant subconscious, I have realized the true value of these pursuits goes far beyond “three chords and the truth.” It is a rediscovering of a condition that is truly childlike and thereby transcendental.

We were watching the Lumineers perform a magnificent set several weeks ago. As they played their popular song “Ho Hey” and the crowd danced and sang along, we noticed that hundreds of people were holding up their smart phones recording these moments with the band. The number of screens was breathtaking; there were so many folks documenting with their devices that it was difficult for everyone else to see the band on stage. Right there in the midst of that incredibly melodic moment, they were worrying about tomorrow! I was distracted and annoyed, until I realized that I live most of my life the same exact way.

You see, as the band sang and the people recorded, I realized that I spend so much of my life planning, scheming, manipulating, and worrying about my next meeting, my next manuscript, my next goal, my next deadline or even our children’s next recital or game. I’m weary of using the word “spirituality,” because the truth is I am just talking about the condition my condition is in. My condition is that I am rarely in the moment. When I am busy planning my life away and worrying about tomorrow, I am far from the present. For large stretches of my life, I might as well be holding a device and recording life’s beautiful concerts for posterity, rather than actively experiencing those symphonic moments. When my wife and I get out on the road, roll the windows down and enjoy the scenery on the way to some concert venue, we are together in that moment. When we are dancing and singing with a band and thousands of other folks, we are present in the moment. We don’t have to be planning or scheming or deciding our next great life adventure: we are just together.

And so that evening with the Lumineers, in the middle of their most popular song, the band abruptly — stopped playing.

Lead singer Wesley Schultz stepped to the microphone and pleaded, “Be here with us now.” He said: “Please put your phones away; just be here with us now.” The band quickly returned to form and charged into the next verse, but no one seemed to actually put away their phone. Schultz stopped the show one more time as they played new material and made the same plea, with the same result.

The truth unveiled in our summer musical expeditions is simply that life happens in the moment. For those who believe in God, remember that he offers us his presence. You will not find God in worries about tomorrow or in longings for yesterday, but only right here, right now in this moment. If you listen closely, you may hear him crooning, “Be here with me now.” For folks who don’t believe in God, then let me tell you that you cannot experience the most important and fulfilling aspect of your life — your relationships — in yesterday or in tomorrow, but only in this very moment. If you pay attention, you will hear the people you hold most dear intone, “Be here with me now.”

As we returned from our trip and plunged into the hectic rhythms of modern life, it occurred to me how profound our musical endeavors have become for us. And how far-reaching is the lead singer of The Lumineers’ plea. We live in a world that cannot experience relationship, cannot experience joy, because we are constantly: Some. Place. Else.

The beauty of our Kerouacian music quests is that for those hours on the road — for the moments dancing and singing along with great musicians — we are learning again to be right here, right now. We are not focused on the destination. We are not busy recording our lives for posterity. We are not hoping for a YouTube moment later in the week. We are remembering how to live in the moment.

Whatever summer brings, whatever life brings, take a moment and drive till you are reminded how to: