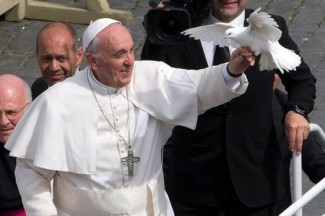 As reforms begin at the Vatican Bank, more officially known as the Institute for the Works of Religion, Pope Francis has also taken on global, personal, and spiritual financial matters in his papacy. Last week while speaking to new Vatican ambassadors he highlighted that “the majority of the men and women of our time continue to live daily in situations of insecurity, with dire consequences… People have to struggle to live and, frequently, to live in an undignified way.”

Reflecting on the economies of the world, Pope Francis pointed out that some exist simply to make money without adequate consideration for the rising number of people living in poverty in our midst. The idea that economic growth is the answer to everything is a theory that the pope hopes to debunk. He noted:

“The worship of the golden calf of old has found a new and heartless image in the cult of money and the dictatorship of an economy which is faceless and lacking any truly humane goal.

The worldwide financial and economic crisis seems to highlight their distortions and above all the gravely deficient human perspective, which reduces man to one of his needs alone, namely, consumption.”

Nearly two-thirds of the world live in situations of poverty without access to clean water, shelter, and food. In the pope’s native Argentina, 11 million people (out of 40 million) live below the poverty line.

Know your power
The pope’s call to be mindful of the gaps between the rich and the poor is not limited to the world’s global economic powers. Throughout his life and now his time as pope, Francis has focused attention on the struggle and needs of the poor. He wants to remind all of us — and the Church hierarchy included — that we must be careful to avoid greed, vanity, and pride (one of the deadliest of sins) when we are given great power. When those with great power in the Church use it to accumulate wealth as opposed to inspiring people to serve one another, we’ve got our priorities out of whack. And that’s where Pope Francis comes in, eschewing all the trappings of majesty in favor of simplicity. Needing only a simple residence instead of a mansion and hoping that others — in the Church and beyond — follow suit.

It’s often not convenient for us to think about those struggling to make ends meet ahead of our own oft-tweeted #firstworldproblems — my car keys need to be recharged, the pantry’s not big enough for the groceries, or myspacebarisbroken. But that’s exactly what God calls us to do.

For many, the abuse of our power as consumers leads us into troubled waters. Last year during Lent, I decided that I was going to start to give away things that I no longer needed. The practice was actually very freeing and an opportunity to think about what was essential and what I was keeping for purposes of vanity (Wow — look at all those books! Mike must read a lot!) or pure laziness (lots of clothes in the closet I never wear that someone else could). We should all examine how we might make our personal fiscal lives healthier and look for ways to cut back on meaningless consumption.

Offering of the poor
Last week, Pope Francis received a gift of two doves from someone standing along the St. Peter’s Square route of his open-air popemobile. The media seemed to miss the symbolism of the gift. In Jesus’ time the offering of two turtledoves to the temple was the offering of a poor person — a person who had nothing else to give. So, they would have captured two birds and brought them to be sacrificed to God as an offering. Joseph brought this very offering at the presentation of a young Jesus at the temple.

Pope Francis took the birds and released them, perhaps showing us that God does not require these kinds of gifts from the poor, but rather it is the Church, that is, all of God’s people, who need to set the poor free from unjust systems that keep them trapped in poverty. How might we contribute to that freedom in our own lives through our charity, social action, and our personal choices?

Pope Francis — one of the most powerful people in the world — is calling each of us to look more carefully at how we might enact personal financial reform, holding ourselves and others to a greater accountability.