In her most recent book Committed, Elizabeth Gilbert — in the midst of dealing with her own existential apprehension — talked about the role of ritual in our lives. “Ceremony and ritual march us carefully right through the center of our deepest fears about change, much in the same way that a stable boy can lead a blindfolded horse right through the center of a fire, whispering ‘Don’t overthink this buddy, okay? Just put one hoof in front of the other and you’ll come out on the other side just fine.’”

That seemed to line up with my experience when the day of my ordination finally arrived. For the last number of years in the midst of joys, doubts, victories, setbacks, and answers that only seemed to beget more questions, I had simply adopted the policy of just looking down and putting one foot in front of the other. Then one morning, after loosing track of just how many steps I had taken and how many days had passed, I had arrived at May 19. So I simply did what I had been doing every day for the past six years; I took one more step.

On the ride up from Washington to New York for the Ordination, we stopped off at a Potbelly’s. That isn’t necessarily poignant in itself, but as soon as I walked in the door, Blues Traveler’s “But Anyway” was playing over the radio. Do you know how certain times of your life have a certain feel, times in which certain qualities of the exterior world conspire to create a sense that only your soul can identify? Over the last number of months I had been experiencing many of the same feels that I had during college; hearing Jon Popper’s harmonica sent me right back to freshman year. When a Steve Stills song that’s also tied to my freshman year followed immediately afterwards, I chuckled and thought to myself, “Okay God, you’re in charge of this playlist.” It is probably one of the very few times God has actually used “Love The One You’re With” as a nudge to let someone know that He was around, but who am I to question the ways of the Almighty?

It should be noted that this state of grace departed from me rather dramatically a few hours later when we stopped off at the Grover Cleveland Service Area on the New Jersey Turnpike and I consumed a box of Roy Rogers French fries that had been sitting under the lights for two hours. I can’t blame God for leaving me at that moment; I didn’t want to be around me just then either. The Almighty didn’t stay away too long, though. Maybe it’s the romantic in me, but when we crossed over the George Washington Bridge on a clear night, well … it’s hard not to see the divine reflected in the glittering skyline of New York City. 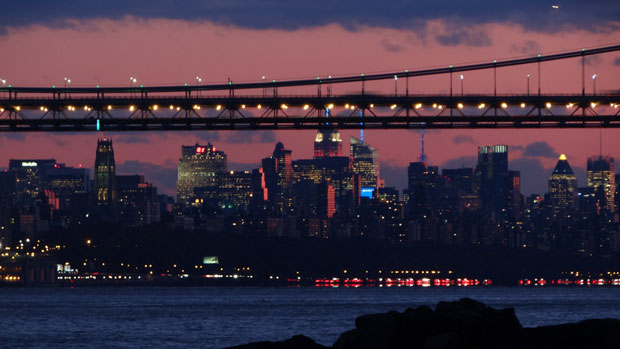 I woke up early the morning of my ordination. I was a little nervous but I figured that if I was going to be dedicating to my life to priestly service later in the morning that I at least deserved a breakfast sandwich and a decent iced coffee. Amazingly enough, there is a Starbucks right around the corner from the rectory on 59th Street. I know, the coincidence of there being a Starbucks in mid-town Manhattan! As I began to reflect on the unlikelihood of that occurrence as further proof of the existence of God, I took a seat by the window with my last meal as a deacon and watched the city of New York walk by. It wasn’t long before I started to recognize some of the pedestrians.

Friends from Texas. People whom I had recognized from visiting St. Paul the Apostle Church over the years. Paulists whom I hadn’t seen in a while. Classmates from Loyola College. Some family members I had not seen in years. Family and friends whom I had seen just 12 hours before at a dinner. All on their way to the church.

I was told by more than a few Paulists that I was not going to remember the ordination itself. That’s not completely true. I do remember being very wound up as we lined up to process into the sanctuary. I vaguely remember laying down on the ground as the people who had gathered — Catholic and Protestant; Christian and Jewish; believers, non-believers, and everything in between — sang to the holy men and women who had gone before to “pray for us.” What I really remember were the parade of priests who came up to lay their hands on our heads to signify our incorporation into the presbyterate. Our heads were supposed to be bowed, but I still snuck peaks to see the next priest was who was approaching. Almost every one of them was connected with a memory of the past six years and almost every one of them would be connected with experiences in the years to come. 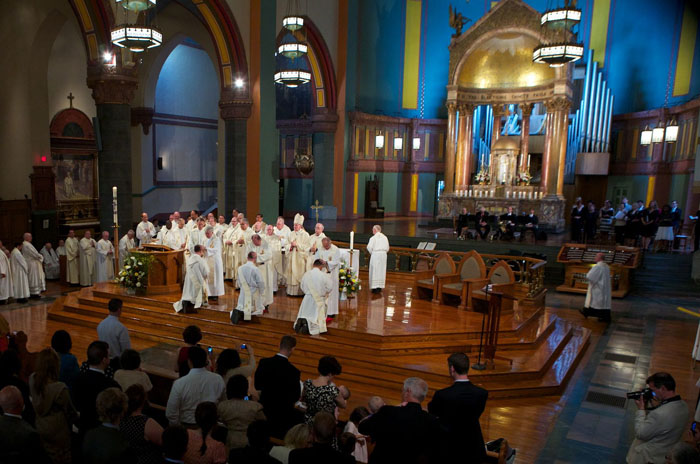 After the ordination was over, we were whisked away Secret Service style to the basement of the church. “If you say hi to just one person, you will be stuck up here for an hour and you have a job to do downstairs,” said the Master of Ceremonies (they’re not just for game shows!). This was fine by me because I had to go to the bathroom. The fact that I still had to go to the bathroom made me wonder if the ontological change had actually taken place. We weren’t given too much time to reflect on the true nature of our metaphysical statuses before we were being lead to the bottom of the church where the crowds were waiting to receive blessings from the newly ordained.

Waiting for each of us downstairs was an episode of This is Your Life. People from practically every time period of my life were there. Some people whom I had met in the last few years. Some people whom I had not seen in a decade. Old neighbors from New Jersey. People I had bumped into only once or twice before. The next three hours were spent greeting people in the reception lines, catching up, and receiving blessings.

I will say that while religious life has afforded me life experiences I never would have the opportunity to have otherwise, I never expected that it would lead me to so intimately relate to the life of the Macy’s Department Store Santa Claus. (This is best understood in the deep voice Burl Ives uses when he’s imitating Kris Kringle in Rudolph the Red Nosed Reindeer.) “Hello there! Have you been a good boy this year? What blessing do you want to receive today?”