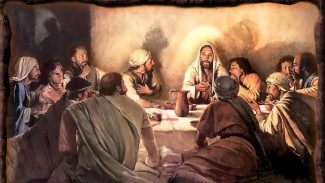 If you knew you would only break bread once more, who and what would you want there? What would you say? Would you be proud of the life you have lead, and the person you had become?

In Jesus’ famous last supper, Christ essentially gathers those who mean the most to him, breaking bread with the twelve disciples. Jesus essentially gives his own self up as offering for Passover. In today’s readings, I see Christ as a person who would give his life up for the greater good, with a heart full of true, agape love for his fellow human beings. Christ loved those around him so much, that he would die for them.

It had me think, “Who would I give my life up for?  Who do I love enough to sacrifice myself for?” Easily, I think of my sister and younger cousins, ranging from five months to thirteen years in age. As someone ten years older, I take on the role of caretaker. I would do anything for them. I love them more than anything in this world. Though I would do anything to make them happy, loving them also means I care about developing their moral character. As a role model in their lives, I want to give of myself any wisdom that I can. I believe that Jesus wanted to give over the parts of him that would also contribute to the growth of the disciples.

However, passing on wisdom also means knowing that it’s there and well developed in the first place. As my Lent journey comes to a close this weekend, I truly hope that extra prayer and thought about who I am and I what I do helps shape me into a person that my cousins will want to emulate to be good people in the future.

Christ wanted to leave his trace of goodness in the world. Jesus didn’t want to accumulate gold. Jesus did not want towns named after him. Jesus held court with those both rich and poor. As he knew his life would be ending soon, Jesus sat down with those he loved, desiring to pass on goodness.  Even more, Jesus wanted to pass on love to those around him. Jesus operated on the hope hat his good actions and love would spur those around him to spread these values as well, making the world a better place.