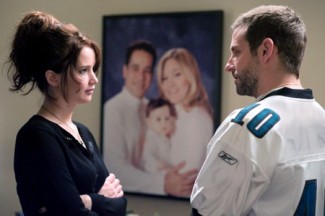 Bipolar disorder, depression, obsession, loss and isolation — not topics that you would think add up to an Oscar-nominated love story. But Silver Linings Playbook shines a light into the dark corners of life that we often try to ignore and balances them with touching moments of connection and healing. Not to mention healthy doses of football and dancing. David O. Russell, the film’s writer and director, uses humor and empathy to draw attention to serious issues in a story about a flawed man who transforms his life with the help of love and family.

When we meet Pat Solitano, played by Bradley Cooper, he has had a rough year. He spent eight months in a mental institution being treated for bipolar disorder. His unfaithful wife has left him and he has no job. Pat’s endgame — to win back the love of his estranged wife — is misguided, but it gets him out of bed in the morning. It’s only after he meets Tiffany, a young widow with her own mental health issues played by Jennifer Lawrence, that Pat realizes he needs to change course. Tiffany and Pat lean on one another, celebrate small victories, and somehow manage to mend each other’s hearts.

That’s the movie in a nutshell. But there’s another important aspect to the film. Pat is not alone before he meets Tiffany. The one constant in his life is, and always has been, his family — specifically, his parents — and the healing power of family can never be underestimated. It can help center and ground you when you’re adrift. The devotion and support that Pat’s family shows, the lengths the Solitanos go to in order to save their son, are humanity at its best, and it’s the part of the movie that most resonated for me.

Pat is not alone before he meets Tiffany. The one constant in his life is, and always has been, his family — specifically, his parents — and the healing power of family can never be underestimated.

The Solitano family struck such a deep chord partly because I grew up in a Philadelphia suburb, a neighborhood not unlike where Silver Linings Playbook takes place. I know those characters. I’ve frequented that diner, and eaten “crabby snacks and homemades.” Televised Eagles games were the soundtrack of my childhood. But it’s not just these superficial similarities that hit home. Watching Pat’s struggles and seeing the safety net that surrounds him made me reflect on my own life and relationships. His journey is not mine, but I too come from a family who picks me up when I am down and stands by me through thick and thin. And to have that is everything. It is Pat’s saving grace, as it is mine.

Pat’s motto “excelsior” (Latin for “ever upward”) is his way of reminding himself to turn the negatives in his life to positives; a lesson that is valuable to us all. And when we can’t turn those lemons into lemonade, it’s nice to know that there is always family.

Silver Linings Playbook goes deeper than your typical romantic comedy. I was moved, entertained, and reminded that nothing is more powerful than the human spirit. Russell and his extraordinary cast of actors showed a ton of courage in telling this story. They earned every laugh and tear and proved that the unbreakable bonds of love and family can help fix anyone.

“The world will break your heart ten ways to Sunday. That’s guaranteed. And I can’t explain the craziness inside myself and everybody else, but guess what. I think of everything everyone did for me and I feel like a very lucky guy.” — Pat Solitano in Silver Linings Playbook