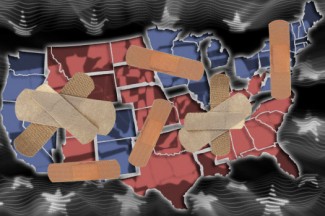 Seven-hundred and thirty-three million dollars. That’s how much the Washington Post estimates the two candidates spent on television advertising during this presidential election. Of that, just shy of $658 million was spent on negative ads, both President Barack Obama and Mitt Romney choosing to use their money to tear one another down about 90% percent of the time. And did it work? We feel divided, bitter, and cynical. (Note: The total spent by candidates, parties, and outside groups in this election will add up to some $2.6 billion.)

This morning, I suspect, half of us are happy and half disappointed or angry. It’s now clear that Barack Obama will serve a second term as President of the United States. But unlike in 2008, when he rode into office awash in a sea of triumphant enthusiasm, when the electorate, though perhaps divided, seemed generally to take pride in electing the nation’s first black president, 2012 finds Obama limping across the finish line, inheriting a bitterly divided nation with oppressively grave fiscal problems and a legislature that, by nearly all accounts, remains dysfunctional.

There is no antidote to help us heal quickly after such a bruising battle. Though it seems silly when we step back a bit, even our Thanksgiving dinners may be rife with partisan tension. Certain classmates or coworkers are probably as upset as you are happy with the results, or vice versa, and studies show that election results can have actual impacts on our mental and physical health.

So what can we do to move on?

First, recognize the sincere feelings and good intentions of those on the other side, whichever side that is, and don’t pick fights. Two of my close friends worked on rival sides, each with quite serious professional stakes should their candidate lose. Since I know both individuals well, I was able to be proud of their achievements and root for both of them, even though I knew one would be feeling pretty low today. Try to remember that those who believe differently from you aren’t bad or malicious, just different. Respect those differences. Or, if you can’t, don’t bring them up at all.

Next, forget about politics for a while and get involved in something else. I write regularly on religion and culture, but for the past few months I’ve focused almost exclusively on politics and the presidential election. Like many Americans, I reached election fatigue months ago, but I was still drawn in day after day to the most miniscule change in polls, captivated by what some crazy surrogate or candidate said or did, and the endless analysis by talking heads on TV. We need a break from it all. Read some books you’ve been putting off. Catch up on a show you’ve missed.
Catch up with some friends over a shared meal. Go to Mass. Just do something, anything, to cleanse your mind.

Finally, when they weren’t busy predicting gloom and destruction should the other side win, both sides espoused some pretty lofty goals during the campaign. Consider what you might do to make them a reality. Concerned about alleviating poverty? Support your local Catholic Charities agency by volunteering or making a donation. Was immigration your issue? Find a local refugee services agency and see if they need help. Were you championing education? Look for local groups that offer after-school tutoring. Hunger? Volunteer at a food pantry. The point is, we all believe in something worthy. Part of our national healing should involve putting those beliefs into action and contributing to a society that looks out for the marginalized and uplifts the poor.

I attended college in New Hampshire, home of the first-in-the-nation presidential primary. In November 2004, George W. Bush won re-election. Just two months later, before the President’s inauguration, I introduced a U.S Senator at a speech to Granite State voters. The race had already begun. Campaigns and politicking are endless. But we have a couple of months now where we can step away, relax, refresh, and focus not on the horse race, but on the mission of making our country a more just place.