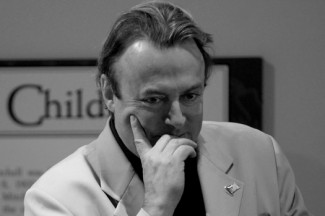 When you study to be a priest, attending Mass is as much of a part of one’s routine as brushing your teeth and applying deodorant. It may not happen EVERY single day, but it usually happens every day.

Anyway I mention this because I consider myself to be a pretty connected person in terms of news events; what I do not learn through my iPhone, I typically pick up during church. When you go to a Mass in which most in attendance feel free to vocalize the thoughts, concerns, and groanings in their souls, it can serve as a regular RSS feed on what is going on in the world. And, ironically, it was in this manner that I learned that the famed-atheist Christopher Hitchens had passed.

I struggled to write this reflection for a while; I was actually asked to do it two weeks ago. On the one hand I cannot claim to have read much of Hitchens’ material, so it seemed unfair to comment on the life of someone of whom I was only tangentially familiar. I had seen him on Bill Maher a few times and while I may not have always agreed with his conclusions — I’ve made a bad career choice if I did — but I usually liked the perspective from which he came. Smart. Concerned about human rights. Willing to critique those in power irrespective of affiliation. Kind-of cynical, which is not always a deal breaker for me. But unlike some, I had no strong reaction to his passing per se.

What I found myself having a reaction to was the response others had to his passing. Specifically, when someone decided to pray for his soul during Mass. It wasn’t as though I thought Hitchens was undeserving of prayers. Indeed, it is often the most undeserving who are most in need of requests for divine intervention. But, and I know this might sound odd coming from a future man of the cloth, but it sounded a bit…presumptuous…when someone prayed for his soul. It was as if the man who offered the intention knew that Hitchens was now facing a Jesus — a Jesus who looked exactly like he does in the Italian frescos — who was actively telling him, “You see, all of those Church people were right!”

Maybe I’m a little sympathetic to Hitchens because I have long appreciated the importance of atheists in my own faith journey. I mean, say what you want about atheists, they keep religion honest. Speaking as a person who has spent the past five-and-a-half years in a venerable Catholic fish bowl, religion always has at least the ability to become a place where — in the process of trying to affirm its own sense of mysterious — self-affirmation becomes the norm and honest self-critique a somewhat unwelcome proposition. After all, the desire to affirm one’s own worldview is deeply imbedded in human nature regardless of denomination. (For Catholic manifestations of this trap see Abuse Scandal, Sex and Wars, Holy.) Consequently, atheists have often played a particular role in pointing out the flaws in a particular religion that that religion might not want to see.

That being said, it’s not as if atheists do not share in the danger of falling into the same trap. My experience of atheists is that their arguments often do not concern God himself (or herself or itself), but frequently their arguments start with the premise that there is no God and then quickly move on to critiquing religion. And it is true; God is not a concept that lends itself easily proven by intellectual methods. Most arguments for God’s existence I have encountered have usually been helpful in giving an intellectual construct to my faith but have been riddled when subjected to the rigid rules of a “proof.”

Okay, I’ve gone on for a while and I still don’t know what this means in terms of the significance of Christopher Hitchens. But maybe that’s the point. In the final analysis, all human knowledge is limited. We all have our blind spots. Hitchens could be inspiring to many when he helped to critique the abuses and dangers of religion. Hitchens could be infuriating to others with the critiques he lobbed at religion by insisting that arguments had to stay only in the intellectual realm. In any case, he simultaneously served for me as both a supporter of, and a cautionary tale for, the importance of humility when trying to understand the true dynamics of the larger universe.

The ironic thing is, in regards to the God question, Hitchens now knows more than the rest of us do at this side of the worldly divide. I suspect that he came to the end with a mixture of smug satisfaction at having asked better questions about man’s quest for the divine and spine-breaking humility of being confronted with the limited nature of those questions in the first place.

In other words, he was like how the rest of us are now and likely will be when our time comes. I’ll be praying about that during Mass.