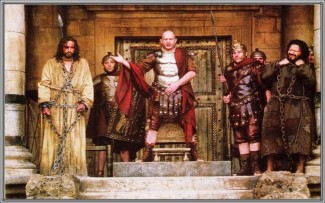 This past Palm Sunday, lectors at church acted out the passion of Christ, in the days leading up to his crucifixion. Ever since I can remember going to Palm Sunday mass, one of the more intriguing parts of the reading dealt with the choice by the public to choose to release Barabbas rather than Christ. As a young person, I felt so much anger during this part. I thought, “Can they NOT see the obvious choice!?!?!? Why wouldn’t they choose Jesus? He’s the GOOD one!” Of course, the outcome of the story of the Passion never changes. The public frees Barabbas, and the beginning of the hard journey to cross begins.

This part of the Passion still intrigues me as a young adult. However, now I think more about Barabbas as a human himself, rather than the opposition to Jesus Christ. I’ve realized that all these years, I’ve categorized Barabbas as the “other.” Barabbas had always been what Jesus wasn’t: a good man who had killed. However, I always made this category judgment due to wanting Jesus to be released and not lead to the hard journey to the cross. However, I never really stopped to think about Barabbas himself as a person.

According to Mark 15:7, Barabbas is only mentioned as being in prison “along with those in prison along with the rebels who had committed murder in a rebellion.” However, no mention is made of him being an evil being, only having committed grievous sins. Nothing is made of his background. I mean, who were Barabbas’ parents? What led to his journey to jail under Pontius Pilate? Did he have anyone that loved him? Maybe if I knew the answers to these questions, I would not have cast him off so quickly in anger.

So then, what ever happened to Barabbas? No further mention is made of Barabbas after his release. Did he become the villain that many interpret him to be, as Jesus’ opposite? Or did he go to a life of peace after realizing his sins? I cannot know these answers. Because I cannot know these answers, I cannot dare judge a man whose life and actions I do not know. Even if I find his sins to be wicked, I cannot hold anger in my heart forever. For if I did, I do not think I would make for a good Christian.

Though I am still sad that Barabbas was released instead of Jesus, this Lent, I have learned that I want to look out for the Barabbas in my life, the people who may have fallen on the wrong tracks. As much as I can despise deeds of the past, I wonder if I would ever let any feelings of judgment cloud my ability to forgive or release anger in my heart. Even if Barabbas did deserve to be in prison,  I truly think Christ would extend his heart and hand to the prisoner with hope for a repentant soul.