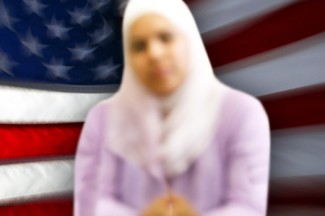 At 13, I walked the halls of my middle school proudly as the smart Egyptian girl who brought in stuffed grape leaves for lunch and baklava for dessert. Like most teens, I was still trying to figure out what it meant to be “me” as I navigated the awkward early years of my teenage life.

I grew up in Deltona, Florida, where I was one of a handful of Muslims in the city. That being said, I was known as the “token Muslim.” I felt happy and comfortable being a commodity while most people were still just trying to fit in. At some point I realized I could never fully assimilate, no matter how many shirts I bought from Aéropostale or Limited Too. I would never be cool, but that was ok. I embraced my differences and tried to be a good example of Arabs and Muslims to my peers. I fasted during the month of Ramadan, and explained to my classmates yearly why I did so. After a few years, my peers would tell the new students in the class why I wasn’t eating during the daytime. It was like having my own public relations firm, and what teen doesn’t love that?

One Tuesday morning, I remember the atmosphere in my classroom feeling tense. The few lucky kids who had cell phones were getting phone calls from their parents. Two planes had crashed into the World Trade Center Towers in New York City.

No one really knew what was happening. Our 13-year-old minds didn’t quite fathom the scope of what had just occurred. Questions filled my head: Who did this? What did this mean? Why us?

Had it become bad to be a Muslim?

After speculations of who was behind the 9/11 attacks surfaced I felt a change in how I was treated at school. My parents didn’t really warn me about what people might say to me as word broke that the hijackers were Muslims. They probably didn’t know what to say because they themselves were shocked. I remember hearing my mom praying, “Ya rab (oh Lord), please don’t let the attackers be Muslim.” And they were.

I tried to act as normal as possible the next few days at school. Inevitably, any class discussion boomeranged back to 9/11. At that point, I felt like all eyes were on me whenever someone muttered, “Muslim,” “Arab,” or “terrorist” at school.

I found a classmate waiting in line for the water fountain a few days after 9/11. We spent the last four years together in the same schools. He walked up and took a sip of water, turned around, and said, “Hey, terrorist.” I can still remember the sick smile on his face as he said those two words.

He walked away; I stood still.

There were plenty of instances where people took their aggressions out on me because of my faith and background. It seemed to get worse year after year. I was always defending my religion, my customs, my way of life. Why had it suddenly become bad to be a Muslim?

During a class discussion some years later in high school, the topic once again returned to 9/11. I stayed quiet, listening intently to what my classmates had to say. A senior raised her hand. She gave her thoughtful opinion on the matter, and it went something like this:

“I think they should just drop a bomb over all Moz-lems and get it over with already.”

I couldn’t believe it.

I felt my face grow hot as I raised my hand and politely asked her why she wanted to kill so many people. She explained that since Muslims killed so many people on 9/11 it should be reciprocated. A giant bomb should be dropped over the entire Middle East, she continued, and that would solve our future foreign policy problems.

I didn’t really know what to say. I thought about it for a moment; what would happen if she were president and dropped a bomb that would obliterate my grandmother, aunts and uncles, friends, and acquaintances? I thought about being included as well. What would I do if I had to die because of my religion? Would I remain steadfast in my faith?

I started to cry uncontrollably. It was as if all the years of silence and strength dissipated. I left class and sat outside. Later on, after the guidance counselor came and talked to me, my classmate apologized. I couldn’t tell if it was genuine, or if she just said sorry to get out of trouble. It didn’t matter. Her words hung heavily in the air around me. I went home early that day.

My dad picked me up and saw my red eyes, still puffy from the tears, and didn’t say anything in the car. He just patted my hand and drove in silence. He announced during our community’s Friday prayers what happened, and members of my congregation came up to tell me how brave I was to combat that kind of rhetoric. But I didn’t feel brave. How could I feel brave when I cried?

Living in a changed world

As I grew older, I became more accustomed to hearing people make negative comments about Muslims. I became jaded.

Someone calling a Muslim a terrorist? Meh, happens every day. A bearded, brown-skinned man getting pulled for extra security screenings at the airport? The usual.

It was as if I lost the fight in me. I grew tired of always having to stick up for being a Muslim, to try to change the minds of unchangeable minds.

This is my reality. This is what I still deal with, a decade later. I still think about what happened on 9/11, and I feel sadness for the lives lost, anger, paranoia, pain, and contempt.

And hope. Hope for a better future and for a growing awareness of what it means to be a Muslim today. I’ve carried these emotions with me since that day, and they will still be around long after the TV specials on the anniversary of 9/11 are over. But I have to remain optimistic that eventually, being a Muslim won’t be looked down upon. If not for myself, for the future generation of Muslims and non-Muslims alike who have to live in a world much changed after that Tuesday morning.