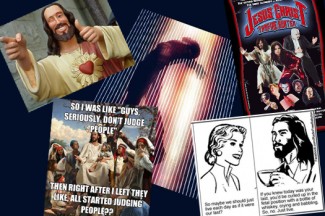 I’m going to go out on a ledge here and just say this: Kanye West isn’t all that bad. He’s been getting a lot of press lately surrounding his “Yeezus” tour, particularly for bringing “Jesus” on stage at the kickoff concert of the tour for his grand finale. The act was bold, certainly, and may have offended some who viewed the appearance only on its surface, but a second look reveals that Kanye may have actually had a point. In a recent interview with San Francisco’s Wild 94.9’s the JV Show, West explained his intentions in making a heavenly encounter part of his show, saying he wanted to point out that, “you can have a relationship with Jesus. That you can talk to Jesus.” West also noted Christians’ ability to portray God through art or an image is “what’s really awesome about Christianity.” In that spirit, I’ve taken a look at some of the more interesting ways Jesus has been depicted in pop culture starting with Kanye West’s own “Jesus Walks.”

“Jesus Walks” is a song from Kanye West’s 2004 debut album The College Dropout. In it, West addresses typical rap conventions (people who will “snatch your necklace” or “jack your Lexus”), but in the midst of this, he also incorporates an important message about Christ — in fact, he echoes the message of Christ himself. “To the hustlers, killers, murderers, drug dealers, even the strippers (Jesus walks with them),” he raps, “to the victims of welfare living here in hell, yeah (Jesus walks with them).” Here Kanye is reminding us that, though we typically look down on these people and those who are like them, they are the exact kind of crowd that Jesus associated with during his time here on earth. Think of the disciples and apostles whom Jesus kept at his side and called his friends: among them were women, tax collectors, prostitutes, fishermen — Christ actively engaged with the outcasts of his society, and so should we.

Kanye also has an important moment a bit earlier in the song, where he states (somewhat similarly to Sandra Bullock’s character in Gravity): “I want to talk to God but I’m afraid because we ain’t spoke in so long.” This is all too common an issue, and a topic that Kanye is not the only one to address. In a slightly more goofy way, the opening number from Jesus Christ Vampire Hunter briefly touches on the subject as well, mentioning a list of reasons that people might believe God has let them down. They range from the silly (“You’re not very tall”) to the serious (“my job’s not very good”; “I have no job at all”; “I can’t find true love”). Yet, in the quirky and ridiculous way that this movie does most things, Jesus is there for these people — he reminds them that, though they claim to be wounded by the struggles of life, He too suffered wounds for us and for our sins.

Moments like this can, in a heartbeat, escalate a movie from laughable farce to somewhat of a theological lesson, and Jesus Christ Vampire Hunter isn’t the only example. Take Kevin Smith’s Dogma as additional proof. At first glance, it’s the story of fallen angels trying to exploit a religious loophole to get back into heaven, a charlatan of a cardinal trying and failing to “modernize” the Church, and an irreverent slew of thinly veiled religious references, but just a scratch below the surface, some powerful takes on theology emerge, particularly about God’s willingness to choose outwardly sinful people to do God’s work. Particularly interesting is Cardinal Glick’s “Buddy Christ,” part of the fictional “Catholicism WOW!” movement. In the movie, “Buddy Christ” is instated as a replacement for the crucifix as a symbol of the Christian (especially Catholic) faith, on the grounds that “Christ didn’t come to Earth to give us the willies… He came to help us out. He was a booster.” Buddy Christ has become, in reality, the subject of a running gag on the Internet, and a potent tool for reminding us about a very important fact that we often forget about God — He has a sense of humor.

We’ve talked about this before here at Busted Halo®, and it’s been depicted in a rather famous image as well (among other places): God laughs. We must not forget that Christ was a human just like each of us, and as such, he too had fun. He smiled. He had good times with his friends. And he laughed. It’s an important thing to remember in light of such pop culture depictions of Jesus — particularly when coupled with the fact that the fictionalized pop “Jesus” is usually in line with Jesus’ actual teachings. In fact, many of the depictions only serve to further Christ’s messages of love and acceptance, even if they do so in a roundabout and ridiculous way.

Keep this in mind the next time you happen to have a “divine” encounter in movies, TV or other media — maybe God, too, is having a little chuckle about  Coffee With Jesus or Christ’s guest appearance at the NYC Marathon. A particularly good Jesus meme is Story Time Jesus, a favorite of mine because it often makes clever reference to actual Bible passages instead of just appropriating Jesus’ general teachings. The meme’s attention to detail only adds to the humor of the stories’ updating, and proves something that’s at the core of many of Christ’s pop culture appearances: As long as we’re secure in our own beliefs about Jesus, a little laugh here and there sure can’t hurt.