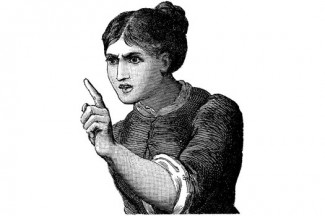 I drink my morning coffee with milk. For some reason, I can barely stand drinking it without. One rainy evening I’m at home on the couch and realize I forgot to buy milk, and I groan to myself, “I should go to the store to get some milk.”

I feel nothing but annoyance, at myself for being so stupid that I forgot to get milk on the way home, and at the universe in general for being so unfair. But no one is telling me I have to get it. I want it. And it’s at the store. So, actually, I am choosing to go to the store because I want milk. I may not want to get up off the couch and go out in the rain, but I am choosing to do this because I am willing to inconvenience myself to satisfy by desire for milk. It’s all free will.

For many of us, a harsh critic dominates our inner dialogue — telling us what we should and shouldn’t do. It shames us about big things. I should make something of myself. I shouldn’t yell at my child. And it nags us about trivial things. I should go to the store to get some milk.

While that last one seems innocuous enough, it simultaneously berates us for being lazy and puts us in a victim role, from which we can reluctantly do the right thing… while complaining. Quite a neat maneuver with just a single word.

But knowing it’s free will kinda spoils the complaining and feeling put upon, doesn’t it? Even without any change in behavior, just a new awareness of how dominated our thoughts are by perceived obligations and obedience can be transformational. In a profound way, saying “choose to” rather than “should” is more honest, and speaking truthfully will gain you the esteem of others, and self-esteem.

Of course, some things are legitimate obligations. Let’s say the milk is for your kids’ cereal and you consider it important for their health. In that case, you might say, “I need to get milk.”

For several months, almost every time I talked with a friend she would say, “I should meditate every day,” then offer excuses for her sporadic practice. Finally, I challenged her to not use the word should and she stumbled. “But I should meditate, shouldn’t I? Why is it wrong to say that?” We talked about it and she went on her way. The next time we met, she shared, “I say should all the time! I had no idea!” She told me she already felt lighter because she was catching herself in those “shoulding” moments and feeling more empowered and engaged realizing she was choosing her actions. She doesn’t meditate daily, but by feeling fewer bad associations with the whole issue, she has more of a chance of getting there.

Things should not be different

Often, we say “should” to condemn the way things are. “I should be further along in my career.” “The world should be at peace.”

But God’s Creation is as it’s meant to be. “The Rock! His work is perfect, For all His ways are just.” (Deuteronomy 32:4) As I’ve said before, wanting things to be different is OK, but thinking they should be different produces anxiety. Because things are the way they are. Reality is. So refusing to accept this is fruitless and frustrating — only by accepting it, can you move forward, taking actions based in reality.

Don’t should on yourself

The saying “Don’t should on yourself” — a pervasive slogan in the self-help world — was coined by Albert Ellis, founder of Rational Emotive Therapy. Ellis also offered this affirmation: “I will stop whining about the Adversities and stop demanding that they absolutely should not and must not exist.”

To oversimplify, RET says your excuses and feelings of victimization and unfairness are beside the point. Only right actions now will lead to right results now. And “shoulds,” because of their shaming quality, undermine the likelihood that you will take right actions.

We get to do this!

What about situations where you should do things you don’t want to do: obligations, holy commitments, moral laws, short-term discomforts that lead to long-term benefits? You should love your neighbors and your enemies (I’m assuming they’re not the same thing); daily meditation leads to long-term benefits even when it feels fruitless.

Approaching even these “good” things as “shoulds” is self-defeating. At best it leads to a grudging compliance, usually followed at some point by rebellion. At worst, it ties the positive result to oppressive obedience, souring us on doing the positive thing at all.

Connecting with the fact that I’m going to church to be part of a faith community and cultivate my relationship with God can help spark a rededication to enjoying it and being fully present when I’m there. This same shift can occur with anything we feel we have to do or should do.

Or conversely, if we try to make this shift and discover that we really don’t want to do it, we may realize we’re doing it only out of obedience. People of faith constantly rechoose their path and, in so doing, keep it fresh and vital. So, don’t be afraid of asking whether you do what you do because you want to or have to. Ultimately, what I’m talking about here is not word choice, but mindfulness. Being conscious of our active choices to take right actions blesses those actions and brings God more fully into them and into our lives.

The sidebar on the right suggests a few exercises you can try. I’m not saying you should do them! Play with them. These are just exercises, meant to be helpful.

Have you struggled with feeling oppressed by shoulds? Have you transformed something that felt like an obligation into something you were joyfully engaged in? Share your experiences by commenting below.