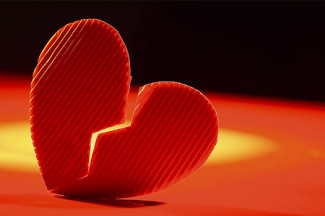 Back in 2004, Victoria Ruvolo made national news when an 18-year-old named Ryan hurled a 20-pound frozen turkey at her moving car. It shattered her facial bones, damaged her esophagus, and caused some brain damage. It nearly killed her, but at Ryan’s sentencing Victoria forgave him and asked for a shorter prison sentence.

I went through all the emotions that anyone would have: Why me? What did I do in my life that was so bad that this had to happen to me? Then I realized God is everywhere, and if he is everywhere, then he knew I was in such great physical condition and because of that, God knew I would be able to live through this terrible ordeal. That’s what kept me moving on, to go through my rehab and get back to life because I was meant to save someone else’s life. Now I know I did save someone else’s life — Ryan’s.

It would be hard for anyone to forgive someone like Ryan or the perpetrator of any terrible act of violence, especially if you’re a victim. But the amazing, stunning and absolutely radical call of Christianity is that forgiveness is not meant to be barred from anyone. “[God] makes his sun to shine on bad and good people alike …” (Matthew 5:45).

It’s so hard to forgive because we don’t have God’s understanding or view of the world, or even God’s kind of perfect love. Our vantage point is limited and shackled by our pain, our human desire for retaliation and revenge, and even our own ego. But Christian discipleship is meant to lead us closer to God’s kind of love.

There are many risks that come with forgiveness. First, the risk to our personal pride and ego. We can feed our pride by maintaining grudges and placing ourselves on higher moral ground than the person who hurt us. Forgiveness risks damaging that image we’ve worked so hard to create for ourselves. The second risk, for some, is that forgiveness seems to go against the pursuit of justice.

Some mistook Victoria’s forgiveness for her saying Ryan’s sinful act was OK. Rather, forgiveness says, “I’m not going to hold a grudge against you.” “I’m not going to be vengeful.” “I’m angry, but I want love and reconciliation to prevail.” In the face of evil, this can take time to get to, but we all must get there at some point.

Perhaps it’s acknowledged for small wrongs, but forgiveness becomes more difficult when the wrong grows in size, affecting more people or becoming more deplorable in our eyes. Scripture is clear though — God is serious about forgiveness.

Imagine calling a murderer a brother or sister. Jesus did when he said that if we are angry with our brother we will be brought to trial like someone who commits murder. Instead, we must drop everything and make peace, even before bringing a gift to God! (Matthew 5:23). Victoria did just this. At Ryan’s trial, she made peace with him and her very act of forgiveness brought her peace.

“My spiritual and emotional health came from awareness that when we hold onto revenge the only person we hurt is ourselves,” Victoria says. “Forgiveness is for ourselves, not for the other person.”

But Victoria’s forgiveness actually inspired Ryan to change his life for the better. He was transformed and given hope. Forgiveness has this unique characteristic of healing both parties, despite the risks. The risks of forgiveness merely cloud the benefits of healing and reconciliation, a true “making right.”

Forgiveness is a hallmark of Christianity, which was exemplified when Jesus forgave the adulterous woman: “I do not condemn you… Go, but do not sin again.” (John 8:11) Jesus exercised not only forgiveness but justice. Jesus called the woman out on her sinfulness but also affirmed her potential for freedom from sin through the gift of forgiveness. This is justice. Forgiveness acknowledges that even the most evil person has hope and is still beloved by God.

Sadly, the living out of this Christian hallmark often falls short. Perhaps it’s acknowledged for small wrongs, but forgiveness becomes more difficult when the wrong grows in size, affecting more people or becoming more deplorable in our eyes. Scripture is clear though — God is serious about forgiveness. Jesus said to his followers, right after teaching them the Lord’s Prayer, that “If you do not forgive others, then your Father will not forgive the wrongs you have done.” (Matthew 6:15)

President Obama, on the evening after the Boston Marathon bombings, ensured that the federal government would help and care for the victims and that those responsible would be found and “feel the full weight of justice.” There’s no doubt that all of us desire justice to be done, but what if the president had said that in addition, we would love the perpetrators and work to forgive them? I think people would have been outraged.

The bombings at the Boston Marathon haunt us. They hurt us; they confuse us; and they grip our hearts with pain, anger, and even resentment. Our psyches don’t know what to make of an incident that turned a delightful and celebratory day into one of terror and death for so many.

But in the midst of such tragedy, God wants us to have a spirit of forgiveness and reconciliation. Love, forgiveness and true justice come with a compassionate heart, even though it may be broken.