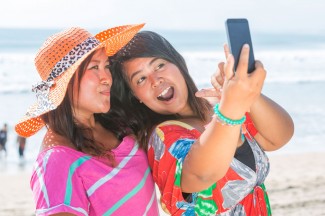 “Can she take a picture with you?” I was a little taken aback and flattered. No, I am not a celebrity, but to one little girl, I was cool.

The person speaking was my cousin’s wife, asking if her very shy daughter could have her picture taken with me at our extended family reunion. I looked over and saw the little girl, blushing and halfway hiding behind her mother. I remember those days.

When I was about her age, I used to think older girls were the coolest thing on earth. One of the good things about having a significantly older brother is that he would bring his girlfriend home, and she would hang out with me, too, standing in for the sister I never had. I wanted to be just like her. In fact, we have a few pictures of us both “getting ready” in front of our bathroom mirror, my hair all crazy with a lopsided barrette and her putting on lipstick. I remember thinking she was so pretty.

Nowadays, I’m the older girl in a little girl’s life.

“You both have such nice, wide foreheads. You can tell you’re related,” said my cousin’s wife.
Immediately, I replied in a way that I later regretted: “Oh, my forehead,” I said, “It’s so huge, and I’m always trying to cover it up.”

It’s true. I’ve always been self-conscious about it. I’ve tried bangs, combing my hair different ways, wearing hats, you name it. I always thought it was this big glaring thing a plane could land on.

I could see my cousin’s wife’s smile fade. “Oh, no,” she said. “I think it’s pretty. I always tell her (pointing to her daughter) she has such a nice forehead.”

I looked down at her daughter and immediately felt like a total idiot. Why, oh why, even at the age of 30, do I still give the slightest care about my forehead? And why, oh why did I just blurt that out in front of a small girl, who thinks I’m awesome just the way I am, just like she is, too.

Still today, even with how far we’ve come with feminism and companies catching on to the idea of body-positive beauty campaigns, body image is part of our public discourse. Just recently, Protein World got slammed on social media for a series of ads asking if we are “beach body” ready (check out the witty response in the article by two female UK bloggers).

But Protein World is just the beginning. We are inundated every day with airbrushed, unrealistic perfection, and as summer approaches, it only gets worse.

My young cousin and I ended up taking a picture together, but I went home that night feeling like I had failed in that moment. It got me thinking about my own body image, and I resolved to not only be better for myself but also to set an example for younger generations who are watching and listening.

As the weather warms and the summer clothes come out of storage, it’s good to think about what ideas of our own we have packed away that now need our attention. This is healthy not only for ourselves, but also for those around us. It’s time to stop letting celebrities dictate the beauty standard and start realizing that we are already a celebrity in someone else’s eyes. Here are some tips I created and have been trying to follow:

1. If you find yourself struggling with an unlikeable trait, find out where it came from. When I think about it, my forehead comes from my Italian side. When I looked at an old picture of my Aunt Tina, there it was: my forehead! The funny thing is, I always thought she was so beautiful! Once I realized that, I began to embrace my forehead and my other family traits. We are formed in God’s image and also in the image of our ancestors. Our bodies are a living, breathing memoir of our family who has come before us. Realizing this, we can take a negative view of our forehead, nose, hair, whatever it is, and realize that it comes from somewhere — and someone — we might truly love. Now it’s time to love ourselves, too.

2. Accept a compliment. I have struggled with this for years. If someone complimented a trait of mine or told me I was pretty, I would shrug it off, laugh it off, or make light of it. Either way, I handed it off to the abyss, never internalizing what they had said. Eventually, I could tell I was making other people sad in doing so. I realized that whenever I compliment someone, I genuinely mean it and desire it to be well-received. For that reason, I began to accept compliments. It was hard at first, but I’ve really grown in this area. Today, I smile and say, “Thanks.” That’s a big step for me.

3. Be mindful of your company. When I gave it some serious thought, I realized people in my life who were unhappy with their own bodies probably influenced my growing up. Our friends and family are one of our biggest assets in life, but when they put themselves down, it can be very tempting to join in or become more self-conscious ourselves. Think about how you might navigate those conversations in a more positive way.