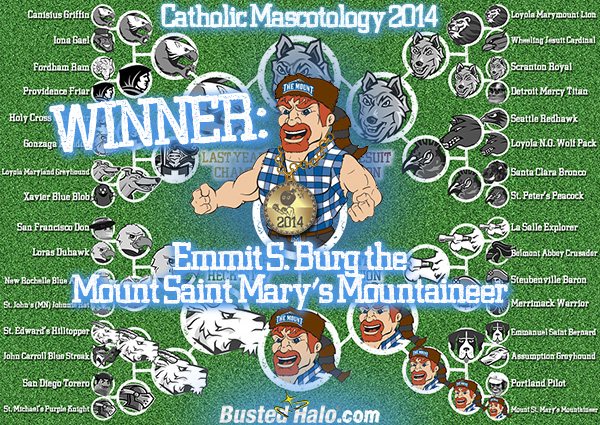 The Mountaineer was ultimately victorious in his last matchup against Iggy the University of Scranton Royal Wolf. Earlier in the day, Iggy had been leading the contest, but the support system of the Mount kicked in and by the afternoon Emmit held a slight lead and was able to keep the momentum going into this morning when voting closed, claiming victory over the Royal and of the entire 2014 bracket:

(However, special kudos go to Iggy the Royal for his gallant success in Day 4 of dispatching with last year’s winner, the Canisius Golden Griffin, who had up until then appeared unstoppable.)

Emmit the Mountaineer’s path to victory began easily enough when in Round 1 he readily beat the Portland Pilot by nearly 1000 votes!

Victory in Day 2 was slightly tougher (winning by 300 votes) when Emmit took on Halo, the Emmanuel College St. Bernard who, being our namesake, we had thrown our cautious support behind.

Day 3 was about the same, as Emmit took on the La Salle University Explorer, crushing his opponent by about 400 votes.

Day 4 was by far the toughest leg of Emmit’s journey as he narrowly defeated his fellow mountain aficionado, the formidable St. Edward’s University Hilltopper, paying heed to their slogan, but no longer necessarily “fearing the goat” when he won by 33 votes!

All of which led to his latest victory in yesterday’s championship.

Congratulations, Emmit! And thanks to all the participating college and university mascots.

We may very well be back next year with another competition as there are still plenty of Catholic mascots out there including some Rattlers, Muskies, some other Griffins, a few more Hawks, Lions, Monks and Bearcats. (Please submit other suggestions below in the comments section!)

See ya next year!

The winner of Catholic Mascotology 2014: