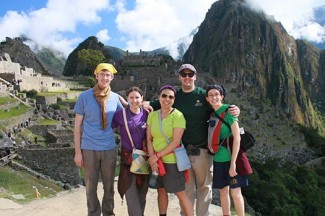 It started as an inspirational speech in my living room. My close friends were seated on our couch, the victimized listeners. Sam was in town from Peru, and we were discussing our plan to visit him in six months. We all agreed that if we were spending a paycheck and a half to fly down there, we might as well see one of the Seven Wonders of the World, Machu Picchu. After making the case for the four-day hike to the ruins, as opposed to the train, I ended by exclaiming, “In the name of adventure!” punching my fist in the air for dramatic effect.

Looking back, I am mildly surprised I was such a rabble-rouser. I love adventure and traveling; don’t get me wrong. I love the outdoors but wouldn’t say I do the outdoors. I also don’t do heavy things. If a friend asks me to help him/her move, I think of what else I might possibly have to do that day. Carry my stuff up a mountain? Was this my quarter-life crisis?

About 20 minutes in, we were giddy with excitement. This was fun! Look at us all adventuring! It was the same feeling you get when you have your first apartment and you start to play house and you feel all independent and good about yourself. And then the sink piles up and the dishes need to be done. Suddenly playing house stops and real life kicks in.

The second day is infamous on the trail. You have to hike up 14,000 feet, crossing over a mountain pass in order to descend the other side. “Doing a 14” is something people brag about in Colorado. But here we were, about to “do a 14” with no hiking experience at all. None of us are marathon runners. We aren’t even gym people.

The climb would take approximately five hours — straight up. Quickly, the looks on our faces became pained with exertion. With each step we took, another one seemed to grow off in the distance.

When I reached the top, I was met with applause, cheers and the elation of my fellow group members and my close friends. We had done it. But as physically demanding as the mountain was, we had little idea that the emotional feat that awaited us the next day would be just as trying.

In the morning, it rained. And along with the rain came a thick, descending fog, tumbling down the cliffs. We all percolated with the same question: “Would all of this be here tomorrow? The Big Day? The day we are supposed to see Machu Picchu?”

As we continued to descend the mountain and my mind grew consumed with what might become of tomorrow, nature, you know, called. I excused myself from my friend and our guide and went to go scout out the perfect place. Once I found it, I noticed a lot of others had shared my same opinion. Just as I realized that, it happened. I stepped in caca. Not llama. Not alpaca. Poop. Human poop. Not a little. A lot.

I’d love to say I was above this experience — that I shrugged my shoulders and kept the stiff upper lip. Truth be told, I was mortified.

When I came back to the two waiting, they burst into peals of laughter. Great.

When we arrived at the campsite, I was officially the Girl Who Stepped in Poop. I wearily asked one of the Brazilians if he could smell my shoes. He politely said no, but I knew the answer was yes. God bless those who sat next to me at dinner.

As I went back to my tent, I was pulled aside by one of my friends, who told me I had acted inconsiderately toward him earlier in the day. In fact, I had. As I went along the trail, I had faced many of my own demons: my own selfishness and lack of consideration of others, being stuck in the past, being fixated on the future, and failing to see the positive in all things.

When I awoke the next day, I was determined to do better. The weather, however, was no better. As we approached the Gate of the Sun, it didn’t help when our guide added, “This is where photographers usually take some of their best photos of Machu Picchu.” Machu Picchu was buried in fog. We moved on, mostly quiet and dejected. I struggled to see the positive side.

As we made the last leg of the journey, I talked to God. We had come all this way, invested so much (including lugging along my best camera, which I splurged on some gadgets for in order to take bragging-worthy photos). All this for pictures of fog? I chastised myself for having the First World problem of going on an amazing trip and whining about not getting great pictures. The weight of my bags was heavy. The demons were heavier.

All of a sudden, someone yelled, “There it is!”

A small miracle happened: the fog began lifting. It began lifting so quickly, in fact, that it looked like a stage curtain being pulled away.

Cheers ensued. A good portion of the people cried. It was a sight to behold: the majesty of what we had waited four days for being revealed before our eyes. With it, our dejection, negativity and seriousness evaporated as well.

I was ecstatic. I began running around telling all my friends, “The fog is lifting!” as if they hadn’t noticed. We group-hugged. We laughed. We high-fived. We had made it.

I knew going into the trip that this was going to be a somewhat spiritual journey for me. Shortly, I was going to leave my life in Chicago and move to Boston. The trip came at the perfect time for cleansing and self-reflection. However, we all agreed we couldn’t have imagined how physically demanding the hike would be on all of us. Physical and spiritual seem to be in two different camps (or campsites) at first glance; however, our faith tells us they are closely intertwined.

The best example is Jesus being tempted in the desert. It seems odd. Jesus is the Son of God. It’s like, Devil, you really think you’re going to win here? But now that I’ve been on this trip, the physical state of Jesus speaks to me. He was fasting, which means he was starving. He was tired. Maybe the Devil thought this would be his best shot?

We, as humans, like Christ, know this all too well. There is something about being physically challenged that can weaken not only our body but also our spirit, opening us up to, well, demons. However, as Catholics, we intentionally put ourselves in those situations for purification. We fast — purposefully inviting hunger. We do so in the hope we will become somewhat better. Looking back on my trip, I can honestly say I was at my worst some days, but at the same time, I also was getting closer to my best.

Before I left for my trip, I sat in the kitchen and talked to my roommate about the grueling trail to come. He looked at me and said, “This doesn’t seem like much of a vacation.”

He was right. It wasn’t a vacation. It was a trip. It, indeed, was an adventure.

But above all, it was a journey.