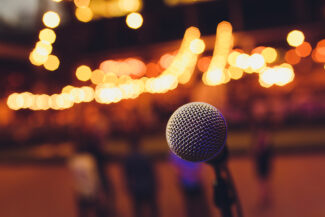 I’m a cradle Catholic who’s loved comedy since I discovered David Letterman on his short-lived morning show when I was 9. I continued to watch Letterman on his late-night show, and when I was 11, my world completely changed with the discovery of comedians on “Saturday Night Live.” There was something incredible to me about these iconic performers who used their sharp wit and fast-thinking minds to make seemingly anything under the sun funny.

As a socially awkward preteen and teen, I granted Letterman and the SNL stars hero-status. I was probably the only kid in my seventh-grade class with bags under my eyes because I set my alarm clock each night for 11:30 p.m. and got up to sneak in watching those shows before heading back to bed.

All I dreamed of was working in comedy, and thankfully those performers set a pretty good example and high standard for me. Nowadays, I’m a professional comic and writer and co-host/producer of a funny talk show on Los Angeles radio station KRLA 870 AM.

My parents didn’t often “get” my comedy when I was growing up, but they always encouraged my siblings and me to follow our dreams and interests as long as we acted on them with good values and class. For several years when I started working in comedy in the 1990s and early 2000s, I kept my routine mostly clean but was still tempted to be edgy and slip some dirty jokes in from time to time.

I always felt kind of guilty about that and struggled with reconciling my Catholic faith and comedic career until I learned about St. Augustine’s principles of striving for truth, beauty, and goodness at a Catholic networking event for people who worked in the entertainment industry. At these gatherings, St. Augustine’s spiritual principles were applied to the arts. I was challenged to think about how I could pursue these values in my work as a comedian. How could I incorporate them into my comedy routine? It was at one of these events that I was able to perform a Catholic-oriented standup routine for the first time.

Another positive influence in my life was the manager of Chicago’s top comedy club, Zanies, who said that I didn’t need to “go dirty” to succeed and taught me that working clean meant putting real thought into my words and would lead to far more opportunities than spewing profanities ever could.

After receiving praise from club managers for keeping my act classy, I was inspired to start my own comedy business with my best friend and fellow Catholic comic Scott Vinci. The idea for Catholic Laughs came from my longtime friend Father Don Woznicki, whom I met in Chicago before I moved to Los Angeles 17 years ago. Father Don now lives in Los Angeles and is establishing an outreach program to the entertainment industry called New Ethos.

Father Don wanted an easy, fun way to introduce himself to his congregation since he was entirely new to Los Angeles, and he asked if I could produce a monthly comedy show during the “bagel hour” after his 10:30 a.m. Mass on Sundays. Scott and I rounded up a few talented comics we knew and put on a rather informal show that had the audience of 50 looking confused at first before they relaxed and laughed.

RELATED: Lessons from Improv Class: How Practicing a ‘Yes And’ Spirituality Strengthened My Faith

By the fourth month, we were drawing 100 people to the bagel hour shows and some of them were faces that Father Don hadn’t seen before in his congregation. Church members were telling their friends, and residents of the neighborhood were sneaking in for a laugh after they heard there was legitimate comedy happening in the parish hall.

It was amazing to see so many people of all ages coming together after Mass and laughing whole-heartedly. There were whole families, including one man who repeatedly brought his wife and eight children in from Thousand Oaks, which is 90 minutes away.

Nine months after starting the bagel hour shows, we produced our first real, night-time show with a stellar lineup of veteran Catholic comedians who play some of the best clubs and TV shows in the country. We drew a crowd of 180 people to a parish hall that legally held 150 before we had to start turning people away. Since then, we’ve been producing shows all over Los Angeles parishes.

Knowing that I can help spread joy among my fellow Catholics, many of whom are reluctant to watch comedy in clubs for fear of being offended, has made me realize I can make a positive impact on the broader culture by keeping my other TV and movie ideas clean yet clever too. I now pray for guidance to keep coming up with ideas that are funny, while also edifying.

Laughter is something we all need. It helps us get through the rough moments of life. Sharing it with congregations and other audiences of the faithful in order to lift their communal spirits is a vocation I’m proud to be a part of.