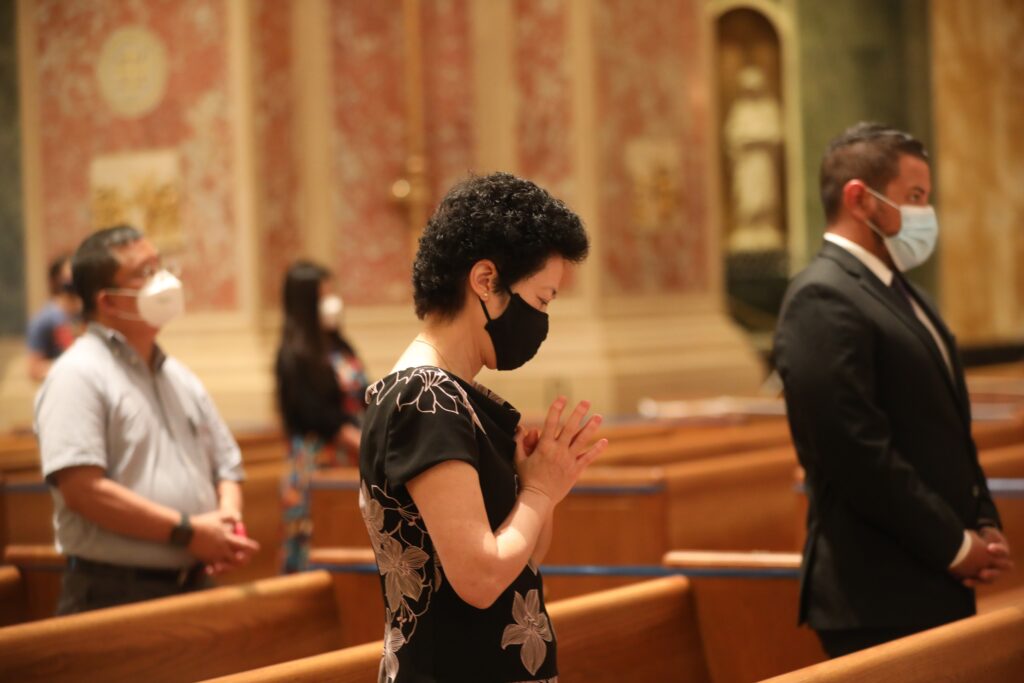 I had not physically been to Mass in over four months because of COVID-19, and it was wearing on my spirit. The churches in the Archdiocese of Washington D.C. were finally beginning to open, but due to the circumstances, the chances of being admitted to Mass were as likely as winning the lottery. Literally. After filling out an online form and submitting it to the parish staff, names are pulled out of a hat, so to speak, designating who may attend Mass in person that week. And to think that just four months ago (which now seems like a lifetime), I was able to attend Mass freely and receive the Eucharist, something I acknowledge I took for granted.

As shame fills my soul to admit, I often found Mass to be, well, boring. I would stifle yawn after yawn sitting through a less-than-exhilarating homily, or slog through yet another monotonous hymn refrain. If it were not for receiving the Body and Blood of Jesus Christ in the Eucharist, I probably would have stayed home and slept in most Sundays. It is not that I do not love the Mass. Despite a lackluster homily or saccharine canticle, when the priest raised that host high above the congregation, joy and gratitude would flood my soul as I realized I was about to receive God himself into my unworthy body. This was my reason for attending Mass.

RELATED: Coming Home: Returning to the Sacraments Amidst COVID-19

Shortly after attending what would be my last Mass before lockdown, I made a firm resolution: to strive to attend Mass more frequently during the week, which would begin with a sincere confession on Saturday, March 14, 2020. But my good intentions were undercut by the virus. I was dismissed from work that Friday the 13th and told I was to continue working from home until further notice (we all thought two weeks at the most). The churches were immediately closed. The eerie suddenness of these events made me wonder if I had waited too long.

Taking the Mass for granted came home to roost with a vengeance. Although I did manage a drive-through confession at my parish during Holy Week, I was unable to receive the Eucharist physically, having to rely on spiritual communion. I tried to watch live-streamed Masses on TV, but that was almost as difficult as laboring through those hymns. Still, God does not leave us comfortless. During these difficult days, I rediscovered prayer, particularly the scriptural Rosary, which helped me to concentrate more fully on the life of Christ and his mother, Mary; and the Divine Mercy Chaplet. Saying these prayers daily gave me peace and a renewed appreciation of my faith, along with a deep longing for the great gift Jesus gave us of himself.

RELATED: Mass on TV: Tips for Transforming the Couch into a Pew

My name was finally selected, and I was given a seat at Mass last Sunday. It was strange walking into the hushed church with other masked worshippers, escorted to a pew appropriately distanced apart. There were no missalettes, no singing allowed, no greeting one another.

I had been struggling as to how I would receive the Eucharist, whether to receive on the tongue as I had always done, or accept Our Lord in the hand, especially with the new COVID norm. I wanted to show my gratitude for being able to receive the Holy Eucharist again after so long a time away. Then, out of the blue it seemed, Father stated during his homily that one way we could show reverence to Our Lord was to kneel before him in the Eucharist. I almost gasped as this seemed like a direct answer to my dilemma. But I waited before deciding until it was my turn to approach Father. “I would like to receive on the tongue,” I said to the usher. “Is that permissible?” “Yes,” he responded enthusiastically and waved me towards the priest.

I watched as the other communicants approached the altar to receive Jesus and was overwhelmed by the sense of closeness I felt to God at that moment. Without music, almost in complete silence, the simplicity and beauty of the Mass overwhelmed my soul. The tears flowed. It was one of the most moving Masses I have ever attended.

I do not know if I will be fortunate enough to have my name pulled again to attend Mass next Sunday. But one thing I do know: I will not take Mass for granted again. Instead, I will regard it as the great gift of life and hope given to us by our redeemer, who promised he would not leave us orphans. I might even burst out singing, “Here I Am, Lord.”