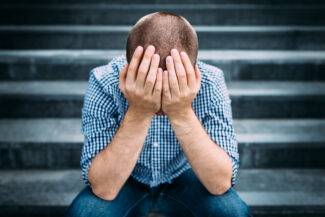 My adult daughter and I have a “no guilt” pact. Although we do our best to stay in touch regularly, sometimes life gets in the way, and we go for a long time without calling or sending a text. When she first left home to take up a new job in London (around 200 miles away), we’d often spend our first few minutes of a call apologizing for not being in touch. So, we agreed on our pact. We both knew we loved each other, so we moved past the typical response of feeling let down.

Being let down can range from something relatively minor, like a friend forgetting your birthday to a major betrayal such as your partner having an affair. But when it happens, we often feel hurt, angry, or rejected (and often all three).

Jesus had many occasions in his own life when others let him down. His community didn’t believe in his ministry, and on one occasion, his own family began to doubt his sanity. His disciples fell asleep when he asked them to pray as he awaited his arrest, then ran away as he was taken into custody. And Peter, despite his earlier bluster, denied he knew Jesus three times.

But Jesus was compassionate and understood their frailties. He offered forgiveness and reconciliation, most memorably when he ate breakfast with Peter on the beach after his resurrection, asking a significant three times whether Peter loved him.

Here are some lessons on how to handle situations when others let us down.

RELATED: How to Tame Your Inner Critic

It can be easy to jump to conclusions and think someone has let you down deliberately when that might not actually be the case. Only a couple of weeks ago, I waited all evening for a promised call from my sister, but the phone remained silent. Finally, very late at night, I got a text. She’d been in the ER all evening with her adult son who’d suddenly fallen sick with a racing heartbeat.

Ask yourself whether it’s in someone’s character to deliberately fail you. There may be good reasons why someone’s let you down.

Try not to take it personally

It’s also understandable to think that the problem lies with you. When I was in therapy several years ago, I began to recognize my own negative thought patterns and found great value in trying to see things from another’s perspective. If that good friend suddenly ignores you in the street, it’s more likely they were distracted rather than cutting you off purposely. If repetitive, unhelpful thoughts are a problem for you, counseling or therapy might be useful in helping you recognize and tackle them.

Have an honest conversation

If the letdown is playing on your mind and affecting your relationship, you might need an honest conversation to clear the air. The other person may not even realize you feel let down, but buried resentments fester, so it’s better to be honest if you’re struggling.

Avoid harsh words and accusations and focus instead on explaining why you felt let down, aiming for reconciliation. When I talk to someone about feeling hurt, I might begin by explaining that I don’t think they meant to hurt me to avoid sounding accusatory without knowing the whole story. But it’s also important to be able to express your hurt honestly. For example, when a work colleague complained to my boss about me (without speaking to me first), I had a “heart-to-heart” with her and told her I felt she had treated me unfairly and hadn’t given me a chance to solve the problem first.

RELATED: Hospitality for the Terrified: 5 Simple Ways to Reach Out to Others

Seek support from a trusted friend or advisor

If you’ve been seriously disappointed, support from someone like a close friend, priest, or counselor might be a critical element in helping you cope. During a very dark period in my life, when I suddenly found myself a single parent of three young children after a betrayal, I found the support of my church leaders invaluable. Sometimes I just cried, sometimes I needed practical help, and often, I just needed to talk through my feelings and consider how to move on spiritually after such a crushing blow. Don’t suffer in silence. Ask for help and be open about your feelings, even if they don’t always seem very positive.

It can take time to work through the process of forgiveness. When old hurts and memories raise their head unexpectedly, I sometimes find myself angry and resentful all over again, even if I think I’ve forgiven that person long since. I’m learning that forgiveness can be a journey, and sometimes I need to forgive the same incident over and over.

In the gospels, when Peter asked how many times he should forgive his brother, Jesus’ reply was uncompromising. Rather than forgiving seven times, as Peter suggested, Jesus said we should forgive 70 times seven, implying that our forgiveness should be unlimited.

Naturally, forgiveness doesn’t always come easily, especially if the hurt runs deep. But asking for God’s help makes a difference. Corrie ten Boom, who was imprisoned in a World War II concentration camp, recalls meeting a former camp guard after the war. She described the difficulty she had in forgiving him initially, but with God’s help, she succeeded.

We’re only human, and it’s natural to feel angry, hurt, and betrayed when we’re let down. But I’m slowly learning to respond intentionally and avoid rushing to judgment when I feel let down. By working at this, I’m hoping to retain relationships with others and live free of resentment and bitterness. It’s an ongoing journey, and I’m only taking small steps, but it’s a positive start.