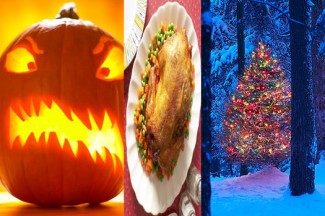 It finally happened to me. This year, for the first time ever — and hopefully the last — I was ready for Christmas before it was even Halloween. Now it could have been that I started in on Halloween a little earlier than usual (I was lucky enough to get to Six Flags Fright Fest the weekend that it kicked off back in September) or it could have been the weather (it was starting to get a bit chilly already toward the end of October), but as likely as both of those possibilities may seem, I think the true culprit here is good ol’ marketing. At the end of September, Christmas lights, decorations, and all sorts of other holiday wares have crowded the shelves, urging us to skip over the fall altogether and jump straight to the season of “Season’s Greetings” — with maybe a brief stopover at the land of ghosts and ghouls to pick up a mask and some candy, of course.

With Christmas starting earlier and earlier each year (now even beginning to eclipse Halloween), we face a troubling question: What’s become of Thanksgiving? I’ll tell you what: Wrapped up in feasting and football and the parade, Thanksgiving has become merely a placeholder between Halloween and Christmas. One only has to look at the looming cloud of Black Friday to see just how the commercial holiday “spirit” of Christmas hangs over the last week of November. It’s pretty much a given at this point… but it doesn’t have to be.

What can we do to keep Thanksgiving and Christmas in their separate corners? The key, believe it or not, might just be to look between the two holidays.

We need to remember Advent.

What can we do to keep Thanksgiving and Christmas in their separate corners? The key, believe it or not, might just be to look between the two holidays. We need to remember Advent.

Advent is the perfect way to move from Thanksgiving to Christmas, as long as we celebrate it properly. Remember the meaning of Advent — from the Latin “advenio, advenire, adveni, adventus,” meaning “to come to” or “to arrive at.” Advent is a time to patiently await the arrival of Jesus. It is a time of hope, love, joy, and peace, a time to not only look excitedly and expectantly forward, but also to reflect on our life as it is right now in the present. As such, it fits perfectly with the reflective gratitude that should be present in our celebration of Thanksgiving.

Moreover, Advent emphasizes a gradual progression toward the happiness that accompanies Christmas, rather than a 0-to-60 jump directly from the calm and grateful atmosphere of Thanksgiving into Christmas morning elation. Advent builds on Thanksgiving’s theme of gratitude for the things we have in our lives now; adding the hope and joy for things expected.

So, as we move through Thanksgiving and Advent toward Christmas, let’s try to keep in mind the ways we can best celebrate the season we are in — through diligent and deep reflection on and gratitude for the blessings in our lives at Thanksgiving; patient and eager prayer and anticipation for the coming of Christ during Advent; and, yes, outright excitement and joy at Christmas. A good way to keep to this is through a simple tracker of Advent, perhaps an Advent calendar or Advent wreath. An Advent wreath, like the one you might see in your Church starting at the beginning of the season, marks each week of Advent with a purple candle (or a pink one, for the joyful Gaudete Sunday), adding a burning reminder of the time that has passed in Advent but also a hopeful note looking forward at how much time remains before Christmas. Chocolate Advent calendars, though a bit more child-oriented, (and their non-chocolaty cousins) serve a similar purpose, illustrating the daily progression toward the day of Christ’s birth. Some even feature scripture or words of encouragement behind the daily door, pointing us forward to the merry Christmas that lies ahead. “Tis the season to be jolly” is coming soon, but for now, ‘tis the season to be thankful.