Some of the greatest teachings of the Catholic Church are focused on social justice. Putting social justice into action means caring for those less fortunate, speaking up when you see injustice, striving for unity rather than division and protecting life in all its varied, wonderful forms. Here are three Catholic saints who lived out their faith on the front lines of injustice, acting with love, mercy and charity in some amazing and unifying ways. 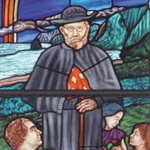 Saint Damien the Leper of Molokai

Saint Damien was born in Belgium in 1840 and was sent across the globe to Hawaii when he was ordained in 1864. While working at a mission in Honolulu, he learned of a leper colony on one of Hawaii’s outer islands. At the time, leprosy was an incurable disease that caused rotting sores, led to poor eyesight and weakened the body until an early death. Lepers lived in squalor on the island and could not leave or have visitors.

Saint Damien felt a special calling to live with the lepers, care for them, love them and ultimately become one of them. He established a cemetery at the colony, tended lepers’ wounds and built their coffins. He would later become infected with leprosy and die from the disease, showing us a true example of solidarity with those who are isolated and suffering.

A cornerstone of Catholic Social Teaching involves valuing life from conception to death, rather than degrading or destroying it. Saint Damien shone a light on those who society wanted to forget and he provides an important reminder for us not to forget nor shun those who are considered outcasts today: the homeless, those living with addictions or mental illnesses, to name a few. 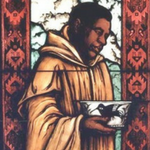 Born in Lima, Peru, in 1579, Saint Martin de Porres was biracial, born an illegitimate son to a Spanish conquistador and a freed slave from Panama who was of African or possibly Native American descent. Throughout his childhood, Saint Martin experienced ridicule and discrimination due to his heritage and skin color. By Peruvian law, those of mixed race were not allowed to become full members of religious orders.

Even though he was denied admission into the Dominican Convent of the Rosary as a teenager, Saint Martin persevered and became a volunteer at the convent, serving as a jack of all trades: part barber, part nurse, part laundry boy.

At the age of 24, Saint Martin finally was granted his holy vows.  He spent his time at the convent founding an orphanage and a children’s hospital. Saint Martin also traveled the streets of the city, caring for victims of the bubonic plague, regardless of their race or status. His character was fueled by compassion for all. His personal triumph over racial injustice, as well as his service to those less fortunate, is an example of faithful perseverance, even when treated unfairly. 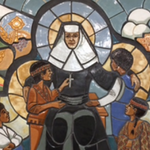 Imagine you inherit millions of dollars. Would you give it all away to charity and work to educate the poor and forgotten?

That’s what Saint Katharine Drexel did.

Born Catherine Mary Drexel in 1858, she was the daughter of a successful and affluent banker and investor from Philadelphia. Only the second American-born saint, Saint Katharine was dedicated to the religious life, the Sisters of Mercy Convent and the education of Native Americans and African Americans.

In 1885, she traveled West for the first time and met Native Americans in dire need of schools. After a meeting with Pope Leo XIII in Italy, in which she asked him for missionaries to teach the Native Americans, the pope actually recruited Saint Katharine to become a missionary herself. The meeting was a turning point in her life and despite inheriting an estate worth millions, Katharine Drexel chose a life of poverty and service.

Saint Katharine helped to give voice to those who struggled to receive an education. Like a mustard seed, Saint Katharine’s dedication to the education of those less fortunate grew into a plentiful network of 145 Catholic missions and 62 schools. She also helped establish Xavier University of New Orleans, the first Catholic college in the United States for African Americans.

The examples of these saints make it clear that social justice is an integral part of our faith tradition. And there is still much work to do. Every day, the news is filled with stories about violence against the innocent, poverty that cripples lives and division rather than unity on a personal, familial and societal level. Saint Damien, Saint Martin de Porres and Saint Katharine Drexel heard God’s call. They got involved. They made a difference. They started small, one day a time, in the community where they lived. You can too.