The celebration of Halloween (or All Hallows’ Eve) comes just before All Saints’ Day and the Feast of All Souls (or Commemoration of All the Faithful Departed). Generally, we associate this time of year with costumes, ghouls, and trick-or-treating. This year, though, let’s get to know a little more about some Catholic saints. These five will add an element of faith — and fright — to your Halloween: 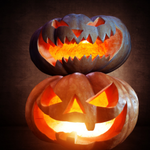 Saints Lucian and Marcian spent their early years conjuring up magical spells. Their charmed lives came to an end when they discovered their potions had no power when used against a Christian maiden. Lucian and Marcian immediately converted to Christianity and then publicly burned their books of black magic. Each gave up his possessions and began living a solitary life rooted in prayer.

Lucian and Marcian traveled around, telling others about Jesus. One day, they were apprehended and questioned about their evangelizing ways. They told the judge that when they were practicing black magic and committing crimes, no one had stopped them. But once they turned their gaze toward God, they were punished. They sang hymns of praise and thanksgiving to God as they were burned to death. 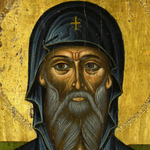 A life of solitude, work, and prayer grounded St. Antony, who lived from 251 to 356. He never ate before sunset, and his one meal was bread with a little salt and water. After St. Antony’s parents died (in his 20s), he sold all of his possessions and became the disciple of a local hermit. He constantly sought solitude, even living in old burial grounds, where his friend would bring him food from time to time.

Later, St. Antony lived for 20 years on a desert mountain, seeing almost no one, except the man who came to bring him food twice a year. People sought him out, asking for his words of wisdom, and eventually, Antony came down from the mountain and founded his first monastery — probably the first monastery, as he is credited with being the first monk. Even though he lived a life of solitude, St. Antony believed that relationships with others were the key to the spiritual life; that in getting to know others he was getting to know Christ. He’s the patron saint of butchers, brush makers, and (gulp) gravediggers. 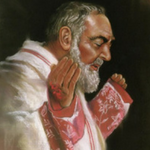 St. Pius of Pietrelcina (Padre Pio), was known worldwide for bearing the stigmata (wounds corresponding to those of Jesus’ crucifixion). In his early 20s, Padre Pio noticed the wound of the spear in his side. Then, one month later, the stigmata appeared on his hands and feet. The wounds bled the rest of his life.

Once word spread, people began to visit and offer him gifts, which later enabled Padre Pio to open a hospital in an old convent.

Vatican-approved doctors examined Padre Pio, and at one point he was suspended from all priestly functions, except to say Mass, which he did in private. He became very ill in 1959 and was cured when a statue of Our Lady of Fatima was brought into the hospital. Crowds gathered to celebrate the Padre Pio Mass on the 50th anniversary of the appearance of his stigmata, and he died the following day with, remarkably, no marks on his hands. 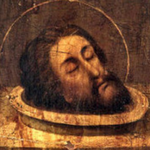 5. St. John the Baptist: Losing his head but not his faith

Among the saints who were beheaded (there’s quite a number), one of the most well known is John the Baptist. He lived as a hermit in the wilderness until he began preaching in his 30s. Attracting large crowds, John the Baptist famously recognized Jesus as the Messiah and baptized him. John the Baptist was beheaded at a birthday celebration for King Herod. Herodias, who was Herod’s current wife and his brother’s former wife, had a daughter who was dancing at the party. Herod was pleased with her dancing and promised her anything. Her mother prompted her to ask for the head of John the Baptist on a platter.

Among the readings associated his feast day (June 24) is Psalm 139. The psalm reminds us that we are “fearfully and wonderfully made.” Being wonderfully made means that even on rough and stressful days, there is still a reason, at the day’s conclusion, to give thanks.