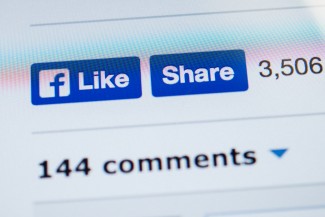 My generation is the Facebook generation. In 2006, when Mark Zuckerberg made his popular college social networking site accessible to anyone over the age of 13, I was a freshman in high school. Back then, Facebook was a new digital frontier, and I was among the first adolescent pioneers who had the opportunity to blaze the trail. Today, Facebook is used by 1.65 billion active users around the world, representing six continents and countless points of view.

At its best, Facebook can be the ultimate connector, a tool to bring people together. At its worst… arguments between strangers can get pretty ugly. In a forum where you can say whatever you want to someone without having to look that person in the eye, it’s easy to forget that our words can have a real — and oftentimes hurtful — impact. Acknowledging this is especially important for Catholics, since we are called to treat others with dignity, respect, and compassion. With that in mind, here are a few helpful hints on how to engage in a healthy dialogue online:

I. Thou Shalt Not Call Someone Names

An ad hominem argument isn’t an argument at all — it’s a personal attack, rather than a response to someone’s stance on something. You might be familiar with the phrase if you follow Fr. James Martin, S.J. on Facebook, where he implores readers not to resort to ad hominem debates in his comment section. It may seem like common sense, but, unfortunately, it bears repeating. Some Catholics just can’t refrain from saying “idiot,” “lowlife,” “monster,” etc. on the internet. More frequently, though, commenters label each other heretics. The word “heretic” gets thrown around so often on social media that it actually diminishes our collective understanding of what heresy is. So next time you feel tempted to use the “H” word on Facebook, ask yourself, “Is Mary Sue from Albuquerque really up there with Arius, Pelagius, and Jansenius?” (Answer: No.)

II. Thou Shalt Not Type in All-Caps

IF YOU ARE TRYING TO MAKE A POINT, YOU SHOULDN’T PUT IT IN ALL CAPS. YOU MIGHT THINK YOU’RE HIGHLIGHTING HOW IMPORTANT WHAT YOU’RE WRITING IS, BUT YOU’RE REALLY JUST ANNOYING OTHER COMMENTERS AND MAKING THEM LESS LIKELY TO READ WHAT YOU HAVE TO SAY.

III. Thou Shalt Not Internet Stalk Someone You’re Debating

I once read a debate in a comment section where one person wrote: “Well, a quick look at your profile and I saw that your mother supports [insert divisive political candidate]. No wonder your conscience is so ill-formed.” This kind of tactic takes ad hominem to a whole new level. To go after a stranger’s mother because you disagree with them? Let’s try to keep our level of discourse above that of a middle school gymnasium.

IV. Thou Shalt Not Intrude on Strangers’ Pages

Isn’t it great that you and your old pal Ida keep in touch on Facebook? Well, Ida’s nephew, Johnny, posts things on Facebook too. And if Ida “likes” something that Johnny posted, it might just show up in your newsfeed! But if you don’t like what Johnny wrote … Woe be unto him! I see people pick fights with friends of friends on Facebook all the time. My advice? Don’t do it. How would you like it if your cousin’s former co-worker overheard you talking in your house and then knocked on the door to argue with you? Even if you think you’re debating with Johnny charitably, if he didn’t post it to a public forum, it’s best to just not comment.

In the wake of a personal or national tragedy, if someone is grief-stricken or anguished, it’s not appropriate to bash them for their political or spiritual views. We are called to respond with compassion and comfort, to offer consolation and condolences for their loss, not to criticize or admonish. To everything there is a season, and a time to every purpose under heaven — when someone is in mourning, it’s just not the time to pick a fight.

VI. Thou Shalt Read Before You Write

If someone posts a link to an article, don’t just read the headline and go into rant-mode! Give your Facebook friend the benefit of the doubt and read what they’re sharing before you respond. If and when you do respond, it can also be helpful to read the words you’ve typed out loud before you post them. Imagine that you’re actually speaking to the person face-to-face and consider the tone of what you’re saying. The Golden Rule applies to everything, including Facebook… Treat others the way you want to be treated!