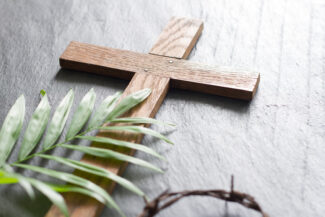 My twin brother and I were 7 years old and at Mass with our parents during Holy Week when we noticed purple veils draped over the normally uncovered statues and crosses in our church. We burst into a flurry of whispers about the possible reasons for the veils.

“Maybe they washed the saints and the cloths are soaking up the water.”

“I think the statues are covered up because they got cold.”

Our mom swiftly ended our theological debate by moving to sit between us.

Little did I know then that my interest in religious symbolism would continue, with a special curiosity about symbols used during Holy Week. Here’s what I’ve learned about the meaning behind some of the most customary symbols of this special time.

Holy Week begins on the Sunday before Easter, known as Palm Sunday. Palm Sunday is named after the palm branches the Jews used to praise Jesus as he entered Jerusalem at the start of his Passion. Palms were an important symbol in Jewish history.

Specifically, Jesus entered Jerusalem during Passover, a volatile time of year when Jews celebrated their liberation from Egyptian bondage while also yearning for liberation from Roman control. It was during this time of unrest that Jesus publicly announced his Messianic mission by riding into Jerusalem on a donkey, in fulfillment of Zechariah’s promise of a peacemaking king for Israel. In their yearning for a king who’d liberate them from their Roman occupiers, the Jewish crowds welcomed Jesus with palm branches, which in biblical times symbolized victory over oppressors.

In commemoration of Jesus’ triumphant entry into the Holy City, Catholics use palms on Palm Sunday to welcome our Savior at the beginning of Holy Week.

During Holy Week (or as early as the fifth Sunday of Lent), some churches cover crosses, statues, and other sacred depictions (not including the Stations of the Cross or stained glass windows) with purple veils. The Roman Missal instructs that, in churches observing this practice, “[c]rosses remain covered until the end of the celebration of the Lord’s Passion on Good Friday, but images remain covered until the beginning of the Easter Vigil” on Holy Saturday.

This veiling of sacred items reminds us that, without Jesus’ ultimate sacrifice and glorious Resurrection on Easter Sunday, our faith and everything sacred related to it wouldn’t exist.

Among the most poignant symbols of Holy Week are the bread and wine. These images recall Jesus’ institution of the Holy Eucharist at the Last Supper on the day before his crucifixion. During that Passover meal, Jesus offered himself as the sacrificial lamb by transforming bread and wine into his own Body and Blood.

After the Last Supper on that first Holy Thursday, the Apostles were invited to keep vigil with the Body and Blood during Jesus’ agony in the garden. In observance of that event, Catholics remove the Eucharist from the tabernacle on Holy Thursday and place it on an altar of repose where the faithful can keep vigil with Christ through the Adoration of the Blessed Sacrament.

RELATED: Why I Stopped Avoiding the Stations of the Cross

Scripture tells us that God’s people used olive oil to anoint, consecrate, and heal. In keeping with that rich tradition, Catholic bishops celebrate a Chrism Mass on Holy Thursday in which they bless three types of holy oils made from olive oil: holy chrism oil, the oil of catechumens, and the oil of the sick. Once blessed, these sacred oils are used during the Easter Vigil, and throughout the year in the Church’s administration of the Sacraments of Baptism, Confirmation, Holy Orders, and the Anointing of the Sick, as well as in the dedication ceremonies of new churches.

The imagery of a towel recalls the moment when Christ, as one of his last acts on Earth, wrapped a towel around his waist and washed his Apostles’ feet at the Last Supper.

To honor that call to service, Catholics participate in a washing of the feet ceremony on Holy Thursday. During the ceremony, up to 12 volunteers sit in front of the congregation and place their bare feet in a bowl. A priest, assisted by ministers, pours water over and dries the feet of the volunteers, sometimes also kissing their feet.

A vivid reminder of Christ’s suffering, this symbol recalls the crown of thorns the Roman soldiers twisted together and placed on Jesus’ head as they mocked him as the King of the Jews before the Crucifixion.

RELATED: Your Essential Guide to the Triduum

The most common symbol of Christianity, undoubtedly, is the cross. First used as a tool of torture and death, the cross has become the sign of salvation for Christians.

Veneration of the cross on Good Friday originated in fourth-century Jerusalem and continues to this day. Veiled crosses are unveiled on Good Friday to emphasize Christ’s redeeming death on the cross that day. The faithful then approach the cross in procession to kneel before, touch, or kiss the symbol of Christ’s sacrifice.

Jesus is the Light of the World, and the image of fire epitomizes that title. Fire exemplifies Jesus’ power in leading the world out of darkness when he defeated death that first Holy Saturday by rising again on the first Easter Sunday.

Holy Saturday’s Easter Vigil concludes Holy Week. The Easter Vigil often begins with the congregation’s gathering around a fire lit outside the church to symbolize the conquering of darkness. The Easter candle is lit from this fire. The congregation then lights their own individual candles from this Paschal candle, signifying our call to spread the light of Christ to the world.