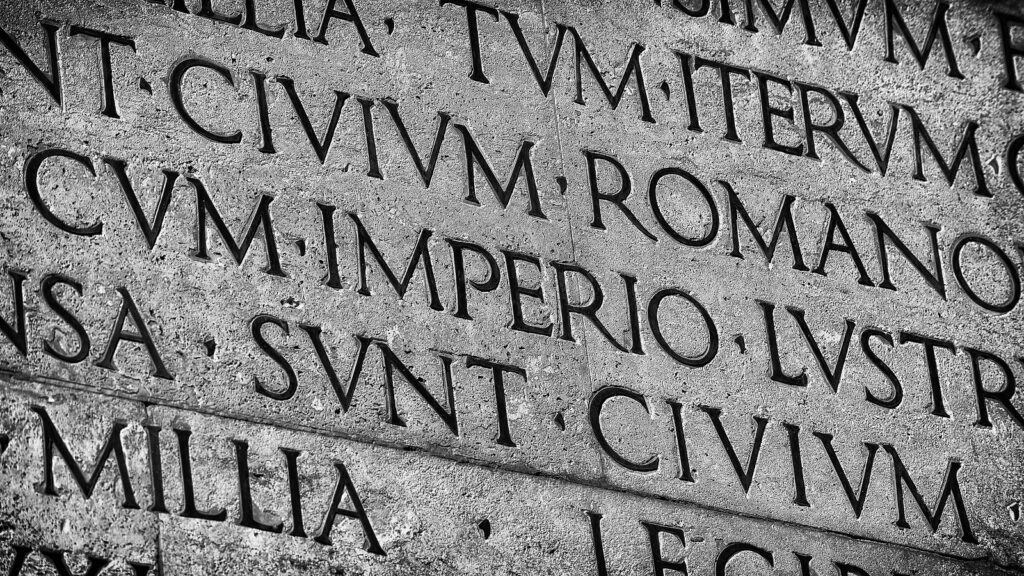 Latin is the cilantro of Catholicism – people either love it or hate it. While I personally became enamored with the language in high school and chose it as a major in college, Latin’s place in the faith eluded me. I knew little about the Church’s use of Latin beyond official Vatican documents and Gregorian chants until after I graduated.

When I no longer had structured classes to engage with the language, I turned toward my faith for doses of Latin. Exploring prayers and the writings of saints revitalized my spiritual life and inspired me to delve into the history of Latin in the Catholic Church.

I soon found that Latin’s function has evolved far beyond encyclicals and traditions — it’s also featured on news podcasts, Pope Francis’ social media, and even a Vatican ATM! Discover the dynamic history and quirky usages that keep Latin flourishing today with these five facts.

1. Latin became the Church’s official language in the fourth century

Greek was the original language of the New Testament and commonly used for liturgies in Rome up to the middle of the third century. As Latin grew in popularity among Christians, the need arose for a translated Scripture. Pope Damasus commissioned St. Jerome, his secretary and advisor, to translate the Bible into Latin in the late fourth century, a version called the Vulgate.

Damasus’ change led Latin to become the principal language of the Church’s liturgies and documents. The Church uses Ecclesiastical Latin, which emerged in the early fourth century as a less rigid form of the classical Latin that writers like Cicero and Caesar used. While both are forms of the same language, Ecclesiastical Latin is often considered easier to learn because it shares more similarities with modern vernacular sentence structure.

RELATED: What is the Latin Vulgate Bible?

2. For nearly 400 years, priests only said Mass in Latin

In 1570, the Council of Trent enforced use of the Tridentine Mass, also called the Traditional Latin Mass, for the Church. In the Tridentine Mass, priests celebrate in Latin and face away from the congregation, who follow along in silent prayer. The Tridentine Mass was used until 1963, when the Second Vatican Council reformed the Mass to increase laity participation, permitting priests to use their native languages instead of Latin, face parishioners, and invite congregations to join in Scripture readings. The Second Vatican Council retained Latin for rites and liturgical chants like Agnus Dei (meaning Lamb of God), and singing as appropriate. The post-Vatican II Mass developed into the liturgy commonly used today, with updates to the instructions and prayers included in the Roman Missal.

In 1984, Pope John Paul II reintroduced the Tridentine Mass, allowing bishops to consent to its celebration by request. In the letter Ecclesia Dei, John Paul explained that he wanted to provide the option to Catholics who felt an attachment to Tridentine Mass and “facilitate their ecclesiastical communion.” Pope Benedict XVI cleared the requirement for special permission in 2007. Benedict wrote, “In the history of the liturgy there is growth and progress, but no rupture. What earlier generations held as sacred, remains sacred and great for us too.”

On July 16, Pope Francis revoked Benedict’s ruling, once again requiring priests to gain approval from their diocesan bishops in order to celebrate the Tridentine Mass. In a letter to bishops, Francis said he is “saddened that the instrumental use of Missalae Romanum of 1962 [the Missal used in the Tridentine Mass] is often characterized by a rejection not only of the liturgical reform, but of the Vatican Council II itself, claiming, with unfounded and unsustainable assertions, that it betrayed the Tradition and the ‘true Church.’”

3. Latin is not just for popes

LISTEN: How Well Do You Know the Latin Phrases Used in the Church?

4. The Vatican turns to Latinists to translate Pope Francis’ tweets

The Vatican has utilized Latin specialists such as the late Fr. Reginald Foster and Monsignor Daniel Gallagher to translate papal documents such as encyclicals, apostolic letters and even tweets. The Latin version of Francis’ popular Twitter account has nearly 950,000 followers.

While Italian serves as the primary spoken tongue in Vatican City, Fr. Foster advocated for Latin’s everyday use. He developed a Latin option for Vatican City’s ATMs that, roughly translated, would say, “Please insert the small card so that you get to know the procedure to be done.”

5. There are words for computer and basketball

“Lexicon Recentis Latinitatis” is a Latin-Italian dictionary for over 15,000 modern words created by scholars to communicate contemporary topics in Latin. In 1976, Pope Paul VI established the Latinitas Foundation, a group tasked with promoting the language and dictionary.

Entries range in categories from technology to clothes. Computer is instrumentum computatorium (tool of calculating), basketball is follis canistrique ludus (game of ball and wicker basket) and flirt is amor levis (smooth lover). There are also translations for blue jeans, popcorn and shampoo.

Despite Latin’s zigzag story in the Church, modern technology and creative innovations refresh its relevancy and accessibility. While my educational background has propelled my love for the language, formal training is not necessary to appreciate it. Incorporating Latin phrases into your prayer can be as simple as the Sign of the Cross: In nomine Patris, et Filii, et Spiritu Sancti. Checking out Pope Francis’ Twitter account or the Vatican News podcast can also splice Latin into everyday life.

Latin is for everyone, and it endures as a vibrant component of Catholicism far beyond the controversial Tridentine Mass. Latin’s persistence over centuries of change cements the language as a reflection of both the Church’s historical legacy and ability to fortify the needs of the modern world.