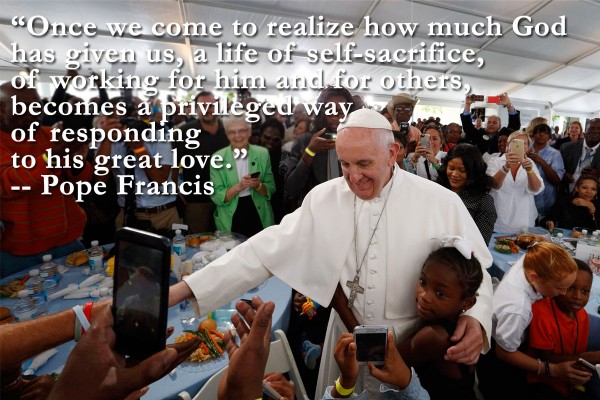 Throughout his visit to the United States, Pope Francis urged people to serve others in need. Leading by example, the pope ate lunch with the homeless in Washington D.C. (photo above) and visited prisoners in a Philadelphia correctional facility. The pope called us to put our faith into action with words and deeds.

Catholics from Western Pennsylvania did just that when they reached out to Arch Street United Methodist Church in Philadelphia in advance of the pope’s visit. One thousand people from the Catholic dioceses of Pittsburgh, Erie, and Altoona-Johnstown made a pilgrimage across Pennsylvania to Philadelphia, and as part of their preparation, they searched online for ministries that served the hungry and homeless in Philadelphia.

Their search led them to Arch Street.

The church was just steps away from the crowds and jumbotrons at City Hall, which Pope Francis passed on his parade route to the Festival of Families Saturday night. Arch Street’s ministry to the homeless, Grace Café, welcomes 200-250 people each Sunday night for devotions, dinner, and fellowship. And the Sunday of the pope’s visit would be no different.

The diocesan pilgrimage group made a $1,000 gift to Grace Café to cover the cost of Sunday’s meal and gathered socks, blankets, sleeping bags, and winter clothing items to contribute to the homeless ministry.

Devotions at Grace Café this week included watching Pope Francis’ mass, happening just down the street on the steps of the Philadelphia Art Museum, in the sanctuary. Dinner was salad and chicken chili. Volunteers served 400 meals Sunday night, including some handed out on the street outside the church to hungry pilgrims who had traveled from across the country and around the world to see Pope Francis in Philadelphia.

The spirit of Pope Francis was on full display in the Arch Street United Methodist Church basement Sunday night. Catholics, Christians, and all people are called to lives of sacrifice and service to others. The pope said so himself: “Once we come to realize how much God has given us, a life of self-sacrifice, of working for him and for others, becomes a privileged way of responding to his great love.”