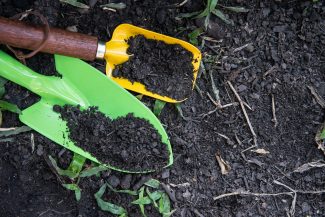 I overheard my small sons talking during snack time in the kitchen. The youngest, who is 6 says, “You know what’s tough about Lent?” It was Friday so I thought I knew where this conversation was headed.

“You can’t say that word, you know, the one praising God,” he continues, stuffing an apple slice into his mouth.

My heart melted, as this was not the response I expected. As I sliced cheese to add to their snack, I thought of Jesus’ words: “From the lips of children and infants you, Lord, have called forth your praise” (Matthew 21:16).

During Lent, we fast from saying Alleluia, the word of praise associated with joy. Instead, we focus on repentance and looking forward to Christ’s kingdom coming, both as the Israelites did in the Old Testament and as we do today as Catholics.

Fasting from Alleluia was fresh on the boys’ minds that afternoon. Earlier in the day, in their Catholic school catechism class, they had participated in burying the Alleluia for Lent. They told me how their teacher had written the word on very fancy paper in cursive writing, no less. She dug a deep hole in the garden and placed the paper inside. Each child took a rock from a basket and placed the rock on top of the paper until the hole was filled, the Word buried, hidden. Then with auspicious delight, they told me the class would dig it out after Easter when they could shout Alleluia to their heart’s content.

A friend of mine once told me about the Holy Saturday Vigil at her Orthodox Christian parish. As at my Catholic parish, the statues and icons would be draped with purple cloth, hidden. No flowers decorated the church that night. The candlelight ceremony would last deep into the night.

Just before midnight, all parish members but the priest would process out of the church. Leaving it dark, empty. The priest would close the heavy wooden doors behind them, leaving them outside in the dark. The church bells would begin to strike midnight as the parish stood in grave silence. With the sound of the last bell, the priest would throw open the doors, now dressed in his resurrection white vestments, and cry out “Hallelujah! He is Risen!” Simultaneously all the lights in the church would turn on, blinding the believers outside.

When you’ve walked through the sober hush of Lent, holding back from saying that word, that word of praise and wonder, you can’t wait to say it.

I wipe the table, cleaning up after the boys’ snack and subconsciously begin to sing a hymn from my childhood:

Through all the tumult and the strife

I hear its music ringing,

It sounds an echo in my soul.

How can I keep from singing?