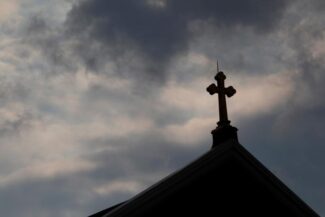 As we all continue to wrestle with the recent, horrifying news about sexual abuse in the Catholic Church, we hope that Busted Halo is a place where you can find support, share your sadness and anger, and above all, feel heard. Here are the most recent podcasts from the Busted Halo Radio Show and Father Dave’s homilies addressing the scandal in some way. We offer these as resources to help process what’s happening in the Church today. We also invite you to join us in praying for all those who have suffered abuse at the hands of the Church. Lord, hear our prayer.

A listener named Michelle calls into the show seeking Fatherly Advice. She shares that a good friend decided to leave the Catholic Church due to the clergy abuse scandals. Michelle understands her friend’s frustration but is upset to see her leave. She wonders if she should be happy that her friend is joining another denomination instead of abandoning faith in God altogether. Listen here.

As the director of campus ministry in a Catholic high school, I’ve gotten a lot of questions about the clergy abuse scandal. Most all of them are some version of: “Why do you remain Catholic?” I understand that some people don’t understand why I would remain a member of an institution that is so clearly flawed. It was hard enough to explain why I didn’t leave the Church back when the horror and scope of clergy sexual abuse came to light across the globe in the early 2000s. It’s harder now, close to 20 years later, as the atrocities of abuse and cover-up have returned to the headlines. Read more.

How Do I Explain the Church Scandal to My Kids? (podcast)

A listener named Cindy calls into the show and asks Father Dave for advice on how to talk to her kids about the clergy abuse scandal. Father Dave asks Cindy to share what she’s already explained to her children. Listen here.

Father Dave discusses the gospel reading in which Jesus heals the deaf man with a speech impediment and gives him the ability to hear and speak. Father Dave relates the reading to those who have spoken out in the clergy sexual abuse scandals and shares that he recently spoke with a victim whose faith is inspiring. Listen here.

At the Solemnity of the Assumption of the Blessed Virgin Mary, Father Dave discusses how the latest revelations about the sexual abuse scandal in the Church have left many feeling hopeless. He explains that it’s important for us to listen and be there for one another, just as Mary was there for her cousin Elizabeth. He also considers how we can support and encourage one another during this difficult time. Listen here.

Bishops, We Are Looking On (homily)

Father Dave addresses the recent news of sexual abuse by priests in Pennsylvania. He discusses the reading from Ezekiel in which God orders Ezekiel to act while others are looking on. Father Dave relates the passage to the horrific sexual abuse report and emphasizes we are all “looking on” and waiting for change in our Church. Listen here.

Sexual Abuse in the Church: How Do We Move Forward? (podcast)

Father Dave and Team Busted Halo discuss the horrific news of clergy sexual abuse in Pennsylvania. We speak of our sadness and frustration, and Father Dave describes how this affects him as a priest. Listen here.