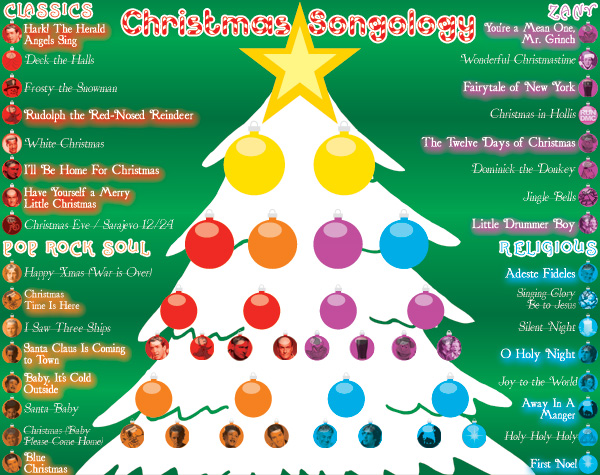 Welcome to Round 2 of Christmas Songology, where you get to listen to, vote on, and ultimately declare which of these songs is the very best Christmas tune out there. Depending on your tastes, yesterday saw some of the very worst (or best) Christmas songs get knocked out of the running as both the Trans-Siberian Orchestra and Mannheim Steamroller were eliminated by the No.1 and 2 seeds in the Classics region.

However, in our humble opinion, three really, really good Christmas songs (and all No.2 seeds) got the boot in Round 1 (Jingle Bells, Christmas (Baby Please Come Home), Holy, Holy, Holy), not to mention Mariah Carey’s Joy to the World (No.3) and Sting’s I Saw Three Ships (No.4) which all just prove nothing more than we aren’t that good at seeding these things for our audience. But seriously, did anyone take the time to listen to Esquivel!’s Jingle Bells? It’s by far more superior, not to mention a lot more fun, than that Crosby/Bowie garbage and deserved better than it got. (By the way, unless you’re voting ironically, we hope you actually listened to Little Drummer Boy and found something you liked about it and aren’t just giving it a pass since it has Christmas golden boy, Bing Crosby, attached to it.)

Other observations: the voters much prefer Rudolph to Frosty, Gospel music did not go over well, and in a snub to Beatles’ fans everywhere, both John Lennon (No. 1 seed) and Paul McCartney (No. 8 seed) were eliminated from their respective regions.

Today there are some pretty good match-ups. Our advice: Listen to these songs (at least in the background) as if you’ve never heard them before, and then make your selections, and help these Christmas song ornaments make their way up the tree.

The first #1 song of the 1950s, Gene Autry’s recording of Rudolph the Red-Nosed Reindeer is the most popular rendition of the song as well as the second best selling Christmas song of all time, falling in just behind Bing Crosby’s White Christmas.

Have Yourself A Merry Little Christmas was performed by Judy Garland in the 1944 musical Meet Me in St. Louis. Though the song often follows the altered lyrics from Frank Sinatra’s cover (“Hang a shining star upon the highest bough”), James Taylor’s version restored the original line (“Until then we’ll have to muddle through somehow”), giving the song a more melancholy tone.

Michael Buble’s version of I’ll Be Home for Christmas is a cover of Bing Crosby’s 1943 hit.

Away In a Manger performed by the Mormon Tabernacle Choir

Away in a Manger, a traditional Christmas carol from the 19th century, contains a verse that some nitpickers out there consider to be theologically ambiguous. It’s argued that “no crying he makes” implies that by not crying, Jesus could not have been fully human as is taught by orthodox Christian doctrine.

Santa Claus is Coming to Town dates back to 1934, but this popular Bruce Springsteen recording comes from a Long Island concert in 1975, (however, it wasn’t released until ten years later).

First recorded in 1948 by Doye O’Dell, Blue Christmas attained its greatest popularity in 1957 when it was covered by the King of Rock n’ Roll, Elvis Presley. The song is getting some special attention this year due to a new cover by 16-year old David Thibault on CKOI Quebec.

Fairy Tale of New York by The Pogues

The Twelve Days of Christmas by John Denver & The Muppets

John Denver collaborated with The Muppets for a full album featuring songs from their 1979 Christmas special, John Denver and the Muppets: A Christmas Together.