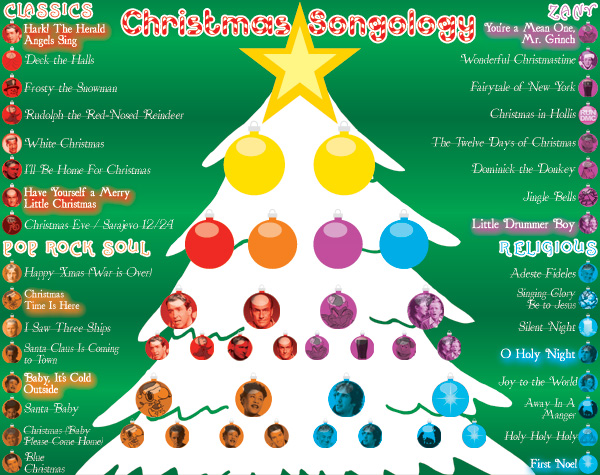 And Rudolph goes down! Welcome to Round 3 of Christmas Songology, the holiday bracket contest where you get to finally help decide what the best Christmas song is. George Bailey and friends and family completely outmatched Rudolph the Red-Nosed Reindeer 67% to 33% in the votes yesterday with their rendition of Hark! The Herald Angels Sing. Other big percentage wins included Josh Groban’s O Holy Night over Andrea Bocelli’s Adeste Fideles (62% to 38%); The First Noel over Away in a Manger (65% to 36%); Ella Fitzgerald over Elvis Presley (68% to 32%); Little Drummer Boy over The Twelve Days of Christmas (63% to 37%); and the Grinch over the Pogues’ remorseful yet fun, heartfelt, romantic Christmas ballad, Fairy Tale of New York, with a whopping 74% to 26%.

Today offers some good as well as some strange matchups, the most exciting of which might be No.1 and No.2 seeds in the Classics region going head-to-head with Jimmy Stewart vs. James Taylor. The Zany region continues to be appropriately named as No.1 seed, The Grinch, takes on No.7 seed, David Bowie and Bing Crosby’s Little Drummer Boy, (arguably the worst song left in this tournament.) Ella finds herself up against Snoopy, and Josh Groban battles it out with the Vienna Boys Choir. Lots of excitement with only these 8 songs left, so go listen and vote!

Have Yourself A Merry Little Christmas was first performed by Judy Garland in the 1944 musical Meet Me in St. Louis. Though the song often follows the altered lyrics from Frank Sinatra’s cover (“Hang a shining star upon the highest bough”), James Taylor’s version restored the original line (“Until then we’ll have to muddle through somehow”), giving the song a more melancholy tone.