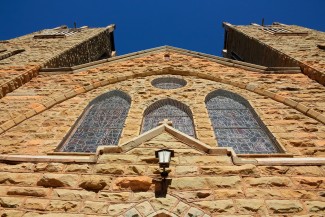 We hopped into a little Nissan Almera and started off around Table Mountain. The South African landmark stood, flat-topped, above Cape Town. The city we knew flowed down to the harbor from there. We were headed to the other side, one that most visitors don’t see.

The car was steered by Matsepane Morare, a Jesuit priest in denim and fringe. Matsepane was going to take my husband and me to Mass in a township behind the mountain, where a large percentage of Cape Town’s 3.7 million residents live.

For years, I’d attended local churches while on vacation. Even when conducted in another language, the familiar ceremony reassured me. The communion bread went down like a vanilla wafer. I always got the comforting, if slightly bland, sense that we share the same Christian faith worldwide.

Typically, these churches were just the closest ones to my hotel. What I’d never done was seek one out more deliberately, by finding out which local parishes were known for their strong faith or great music. This time I’d made an effort, asking local church officials where they’d recommend we attend. By the time I was finished with the South African township church, my approach to “church on vacation” would be different.

We drove into the township of Gugulethu, where cinderblock cottages and tin-roofed shacks flanked the roads. Black Capetonians had been forced here during apartheid, Matsepane explained. He thought we could get into trouble if lost, which is why he’d volunteered to drive. We pulled up to St. Gabriel’s 20 minutes early, taking our pick of pews.

“I’ll pick you up in two or three hours, when the Mass is over,” Matsepane said.

Um, how long? There was plenty of time to look around, but little adornment to take in. A felt banner behind the altar was labeled “Gabriel,” with two words in the local language of Xhosa. The simple stained glass windows were backed by cinder block squares. The bare-bones church restroom lacked soap or toilet paper.

Thirty-five minutes went by — clearly, the service would start late. People were still ducking in. And then the hum of music began. Full voices soon took up the Xhosa song. I sat up in amazement. The entire congregation sounded like a gospel choir! Elderly ladies danced, sometimes in the aisles, and a teenage boy kept rhythm by beating on a hard vinyl pillow.

We soon realized that these parishioners had come to praise. The Mass, with the same blessings, readings and framework all over the world, was experienced differently here. Back home, people check their watches, and some duck out after communion if the service has run much more than an hour.

Here, the priest wasn’t the one dragging out the proceedings. In fact, Father Emmanuel Siljeur was often waiting for the parishioners to finish their enthusiastic music. Before he read the gospel, for instance, people sang out multiple rounds of hallelujahs, each accompanied by swaying, clapping and lifted hands. The priest waited patiently behind the lectern.

The Mass continued in this way for more than two hours. Much time was taken to connect. A newly baptized toddler was processed through the church. The Sign of Peace — in which people traditionally turn and shake hands — took 10 minutes as people strolled around the pews to hug and kiss friends (and squeeze our hands, too).

After the final blessing came announcements. Father Emmanuel first asked if there were any visitors. We were asked to stand and say where we were from. Smiling at us, people clapped long and loud.

Then the priest explained the church’s new need. There had been several recent break-ins, he said, and men of the parish were staying overnight in shifts. A new security system would cost the equivalent of $430 U.S. dollars. Could they raise it?

Then they took up praise songs in Xhosa again. Several rounds of music, collection and jokes followed. Raising money had become an occasion for more worship and fellowship — and that was welcomed, not resented.

Workweeks are long in Gugulethu, and Saturdays are reserved for funerals, housework and shopping, Matsepane explained afterward. “So Sundays become days of song, prayer and really unburdening oneself by taking time off from all one’s worries and troubles, giving thanks for the little blessings, and praying for strength to deal with the coming week,” he said. “It’s also a time for people to socialize!”

Despite the length of the service, I left rejuvenated. We’d seen how patience, an eagerness to connect, and a voice ready to sing could make even the same Mass we knew take on a new spirit.

The faith refreshment which a “vacation” service provides is not just available to Catholics, or foreign travelers. A Methodist friend who visited Philadelphia recently sought out a local church on “Choir Appreciation Sunday” and reported she was treated to a rich hour of music. It just takes a little effort, asking around to local contacts or church offices.

Most services won’t be two or three hours. But even if they are, as in a South African township, they may just be worth it.