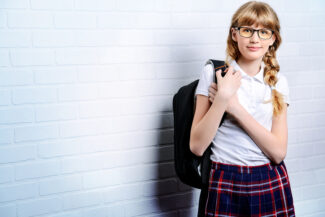 Whenever I’m in the thick of summer, I can’t help but think of the first summer job I ever had. Too young for the hostessing gig at the new restaurant near my home in Massachusetts, and too late to land a coveted camp counselor role, I did what any resourceful 16-year-old would do — I had my best friend get me a job where she was working. And that place turned out to be a Catholic school uniform store.

I was intimately familiar with this store. A Catholic school “lifer,” I was one of the hundreds of local students dragged into the store every August to stock up on plaid skirts, maroon, white, and navy polos, and extremely over-starched oxfords.

A sales assistant position at the Catholic school uniform store wasn’t the sexiest of summer jobs (lifeguarding, obviously), or the most lucrative (caddy), but it was a paycheck, experience, and above all, a chance to spend hours on end with my BFF.

I reported to Deborah, a white-haired, sharp-tongued woman in her 70s who careened into the parking lot every day in a highlighter-yellow VW Beetle. She had a tough-as-nails approach to sales and took sass from no one, not even the most elite Catholic school parent. Deborah ran a tight ship, and if you didn’t follow her rules, you’d certainly have to show up on the first day of school embarrassingly uniform-less. (Also because we were the only store in the area, but, you know, mainly because of Deborah.)

I spent my first few days in awe and fear of her. She could hem pants faster than anyone I’d ever seen. She spoke with such authority that the racks of jumpers seemed to cower in her presence. The Chinese food restaurant next door started preparing her crab rangoon before she even spoke a word on the phone.

I have never been worse at a job. Despite my best intentions, I messed up constantly. The heat press machine used to transfer shiny school logos onto gym clothes and polo shirts, soon became my arch nemesis as I churned out unusable tops. (“Saint Gabriel’s School” just doesn’t have the same effect when viewed upside down.) I could never get the machine’s timing right, and it’s likely that I remain the only employee to have ever burned a shirt, filling the back room of the small store with the lingering stench of clothes on fire.

I frequently misplaced the keys to the hottest store feature — the accessories case, where the most fashion-forward school kids would convince their parents to buy them matching scrunchies, lanyards, and barrettes. I consistently mismarked boys’ slacks for hemming, resulting in an unintentional fashion trend that year — 8-12-year-old boys showing the world a truly offensive amount of ankle.

To put it frankly — at that point in my young, overachiever life, I wasn’t used to being bad at things. I strived to be the model student at my Catholic school. I got good grades, played on sports teams, and was praised fairly consistently for my “quiet and studious demeanor.” So, the store was really my first foray into a life lesson we all have to learn: Sometimes, you’re going to be terrible at something.

Despite my poor showing, I was constantly showed mercy, albeit packaged a little bit differently than I expected. Instead of a pay dock for every shirt I ruined, I was led through a refresher course on the proper way to screen print. When I mistakenly overcharged a customer’s credit card, Deborah stood with me at the register masking her frustration with a tight smile until I knew what I was doing. And that one, fateful day when I thought it was appropriate to show up to work in shorts, Deborah politely informed me that if it ever happened again, we were going to have a real problem. Mercy looked a lot less like the rays of God shining down on me and a lot more like my boss not firing me, which, I suppose, was a different sort of miracle.

RELATED: 5 Ways to Keep the Faith When You’re Unemployed

I spent a lot of that summer learning humility. I wasn’t great at something, and that was OK. With Deborah’s firm guidance, I worked hard to improve on my past mistakes, spending any lulls Windexing the glass displays until they sparkled, and making sure the creases on the folded polos were especially crisp. The number of scorched shirts gradually decreased, and boys smart enough to buy their slacks late in the season had the good fortune of showing a slightly less-offensive amount of ankle.

Deborah and I warmed to each other as the summer went on, and I began to recognize the “love” part of her tough love. There were many mistakes, but for her, compassion always won out. She recognized my summer job as the opportunity for some real teachable moments, redirected me when I veered off-course and taught me that, despite my failures, I was worth another shot if I was willing to put in the work.

While I no longer work in the world of Catholic apparel, I now oversee summer interns, many of whom are young college students experiencing a professional environment for the first time. There are bound to be mistakes, missteps, and puzzling interpretations of “business casual.” But as I continue on the journey to figure out who I am as a leader, I think back to Deborah’s subtle encouragement and pushes to try harder, be better, and learn from my mistakes. Her faith in me, in that very first job, made me feel like I was someone worth investing in, and I hope I can make others feel the same. Especially if I never see a heat press machine again.