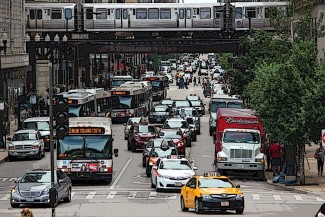 My mom once told me her grandmother prayed a Hail Mary whenever she heard an ambulance siren. Though my Marian devotion is not particularly noteworthy, I was attracted to this custom and took it up.

Since moving to Chicago, I hear enough sirens to pray several rosaries each day. What was once an infrequent enough sound to render pangs of concern for a stranger has become a distraction. Car horns, alarm clocks, and other non-musical sounds that announce to the world just how loud humans can be have always provoked anxiety in me, so the Hail Mary alerts, though originally devised to make me more compassionate and prayerful, have left me more pissed off.

Guilt-ridden Irish Catholic that I am, I still pray the Hail Mary when I hear a siren, and I imagine Mary is usually none too pleased to hear from me. I deliver the entreaty through gritted teeth, with, “Could I get some quiet? I’m trying to work, sleep, or watch a YouTube video,” serving as a subtext to the otherwise lovely supplication.

Perhaps this reaction should not be such a surprise. Though there are many strains and traditions within Catholicism — some of which are gleefully cacophonous — I am attracted to silence. If I go too long hearing others’ voices without intervals of hearing nothing, my head starts to spin. Music blared without headphones, personal conversations in public places (which is happening as I write this), and other noises that clash with my desire to live and pray in a calmer, quieter world swiftly transform me from a seeker of the saints to a prickly monster.

It is a mystery, then, what I am doing in Chicago, possibly one of the worst places in the world for a contemplative. I believe, however, that we are all called to contemplation, and I do not mean just Catholics, monastics, introverts, or small town residents. Whether you are cloistered like Thomas Merton or Saint Thérèse of Lisieux or engaging with the world like Saint Ignatius, Socrates, or Oprah, we can all probably agree that life is meant to be lived with a degree of thoughtfulness.

So, how does one manage to be reflective when thinking seems impossible amidst the racket of a world that will not shut up?

If there is a definitive answer, I do not know it. Nonetheless, living in a big city has forced me to explore how I can, as Saint Ignatius said, find God in all things, even the noisy ones.

First, feeling perpetually irritated by a spiritual practice could be a sign that I need to find a new habit. It is nice my great-grandmother found peace in her Hail Mary/siren routine, but that does not mean I will, or even should. My response to sirens might indicate that if I want to pray the Hail Mary, perhaps I should do so at less disquieting moments.

I have also found that poor conditions for prayer present an opportunity to get creative. Considering the range of human ingenuity demonstrated throughout history, I realize I can probably, at the very least, develop a workable prayer regimen in a large city. As an example, I have found that some sounds, such as Ravi Shankar or Toumani Diabate’s music, are actually conducive to fruitful meditation for me. If I cannot achieve total silence, I can replace the babel with something beautiful.

Finally, I have discovered that if I am feeling vexed, it does not hurt to bring it to prayer, instead of hiding behind sweet but rote repetition. Prayer is not a performance; it is a candid and intimate encounter, whether expressed through words, music, silence, or any other means.

I still do not always, or often, have an easy time finding God in Chicago, but I have not given up. Like the author of the Book of Kings — who waits for God in the wind, an earthquake, and a fire, before finding what he seeks in a whisper — I have learned that God meets us where and when we least expect.