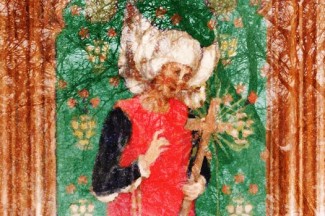 I’m not a sports fan, but I’m a sucker for the Olympic Games. Except for the artistic events like ice-skating and gymnastics, the Olympics themselves are not thrilling to me; what excites me, instead, is the camaraderie.

On any given day, the media delivers conflict, turmoil and scandal into our homes, but the Olympics offer us something radically different: diversity, overcoming the odds and friendly competition. And wherever we are while watching the Games, we know that folks around the world are sharing a similarly uplifting experience.

Julian of Norwich, as we call her, lived as a hermit at St. Julian’s Church in Norwich, England. We actually don’t know her real name or anything about her early years. What we do know of her comes from the tome she penned, Sixteen Revelations of Divine Love, which is said to be the first book in the English language by a woman published.

Staying Fit with Julian of Norwich

Sixteen Revelations details Julian’s mystical experience at the age of 30, in which she accompanied Christ during His Passion. Julian discovered total love in Christ’s suffering, and in turn, translated this newfound awareness to all life’s experiences. During the vision, Julian asked Christ why he allowed sin to enter the world, and Jesus answered her, “It was necessary that there should be sin; but all shall be well, and all shall be well, and all manner of thing shall be well.”

Julian concludes Revelations with another quote from Christ, “What, do you wish to know your Lord’s meaning in this thing? Know it well, love was his meaning. Who reveals it to you? Love. What did he reveal to you? Love. Why does he reveal it to you? For love. Remain in this, and you will know more of the same.”

Which brings us back to the Olympics. Watching this international event of peace, can we begin to imagine a world without war? A world where we resolve our conflicts with a handshake rather than a gunshot? What would life be like for people if they knew that “all shall be well” for themselves, their families and their neighbors? And how do we actualize this imagining, a world where all meaning is love?

Christ revealed His love to Julian through His Passion. Similarly, John teaches us, “This is how we know what love is: Jesus Christ laid down his life for us. And we ought to lay down our lives for our brothers and sisters” (1 John 3:16).

Are not the people of the world our brothers and sisters? Country competes against country in the Olympics, but everyone competing was made in God’s image, God’s love.

And as Catholics, we cannot forget our gay, lesbian, bisexual and transgender brothers and sisters in Sochi. Russian President Vladimir Putin “approved legislation that doles out two-week jail sentences for any visitor to the country suspected of being gay or sharing this information with others,” The Nation reported. Putin also outraged the international community in January when he said that “gay people have nothing to fear in Russia [during the Olympics] as long as they leave children alone,” according to The Washington Post.

Our Catechism teaches us that homosexual persons “must be accepted with respect, compassion, and sensitivity. Every sign of unjust discrimination in their regard should be avoided. These persons are called to fulfill God’s will in their lives and, if they are Christians, to unite to the sacrifice of the Lord’s Cross the difficulties they may encounter from their condition.”

Watching the Olympics this year, let us pray to Julian of Norwich for understanding — understanding how the Cross leads to love, how love transforms suffering, and how “all shall be well” in and through Christ’s eternal love.