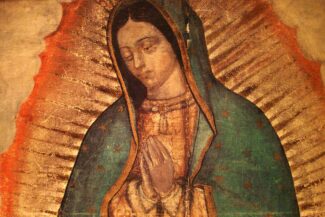 Imagine the delight of my devout Native-Mexican mother-in-law when her sixth child, my husband, was born on December 12, the Feast Day of Our Lady of Guadalupe. With this promising beginning, she lit candles at Mass and gave prayers of thanksgiving for her son born on the day that had already meant so much to her — the feast of the patron Saint of the Americas, a day particularly special to Mexicans.

The history of this feast day goes like this: In 1531, Juan Diego, a poor peasant, was walking to Mass one morning on Tepeyac Hill, now modern-day, Mexico City, when he heard the enchanting sound of birds singing and veered off the path to investigate. He turned to find an apparition of the Virgin Mary. She appeared as a beautiful native princess and told him to go to the bishop and tell him to build a church on this site.

This message was received with skepticism. Juan Diego returned to Tepeyac Hill for consolation and again saw the Virgin. She told him to try again. This time, the bishop asked for a sign. Juan Diego returned to Tepeyac Hill with the bishop’s request. The Virgin said he would find flowers at the top of the hill to take as a sign. Juan Diego finds flowers unlike any he’s seen blooming in the cold of December and filled his tilma, or cloak, full to bring to the bishop. When he unfurled his tilma for the bishop, they are both shocked to find the magnificent image of Our Lady revealed on the tilma!

Inspired by this story, I wanted to see for myself the tilma that has connected my family’s faith with its heritage. So this past February, with our two sons in tow, my husband and I, along with his sister and brother-in-law, stepped out of a steamy Mexico City subway on our way to the Basilica.

We spent hours exploring the immense grounds, the shrine of Tepeyac Hill, now covered in roses, and the Old Basilica, the one built after Juan Diego’s efforts. Finally, we moved toward the New Basilica, built in the 1970s when the original was crumbling.

Mass is held every 45 minutes in the New Basilica, which means throngs of people are either moving out from the last Mass or moving into the building for the next Mass. Looking at the crowds, perhaps worried about our children, my family hesitated, until my 7-year-old, usually the most cautious, least willing to try new things, and resident crowd hater says, “Aren’t we going to see her!?” We all linked hands and joined the massive crowd.

The crush of people was tremendous. I started to panic until I looked up at the beaming faces of others in the crowd. Their joy was contagious. A man spoke Hindi to his wife behind him. She giggled as he slowly pushed their child in a wheelchair, the family elated to be there. Eight young Italian priests had arranged themselves in a makeshift conga line, as to not lose each other. I mentioned to my son how clever they were to put the tallest priest at the front of the line to lead the way. A few people around us spoke English, heard me, and laughed at my comment. They then turned to tease the tall priest in Italian.

We finally made it to the display, where several moving sidewalks carry you in front of the wall where Juan Diego’s tilma is framed about 15 feet above the ground. “There she is!” my son exclaimed in pure joy, as we looked up, making the sign of the cross.

The scene was awe-inspiring. This 500-year-old apron made of cactus fiber should have disintegrated long ago, but it’s absolutely brilliant. The colors far bolder in person than images I’d seen. I imagined the bishop gasping as Juan Diego unfolded the tilma, revealing Our Lady of Guadalupe, standing on a moon with her head bowed in prayer. I’ve read that many of the images surrounding Our Lady on the tilma would have been understood by those worshiping the Aztec gods, such as the snake-skinned moon she stands upon.

I looked around at all the pilgrims who had traveled to this holy site. “She’s so beautiful!” I heard one man exclaim in Spanish to no one in particular. A woman looked up and clapped her hands like a child. I looked to my family, their faces beaming, and felt a sense of bliss to not only be connected to them but also to the pilgrims I hadn’t met who were sharing a moment in time with Our Lady of Guadalupe. As her feast day approaches this year, I hope to revisit that moment of absolute delight. I plan to reflect on what Mary wants us to experience at all times, the joy of knowing her Son.