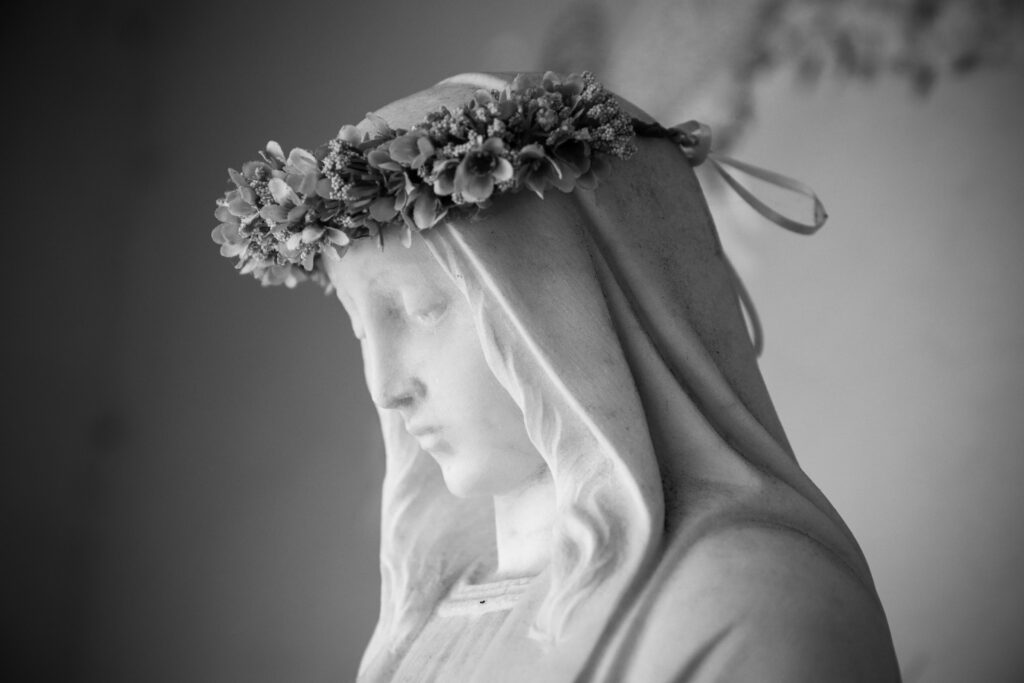 Marian consecration. Even for practicing Catholics who already know a thing or two about devotions to a saint, the phrase might stir up some confusion.

I get it, and I want to help clear up some of the mystery!

I myself stumbled across consecration at a time when I wanted to deepen my faith. I had chosen Mary for my Confirmation name and prayed the Rosary every once in a while, but I felt a call to form a more personal relationship with her. In 2016, I saw that a women’s fellowship group was leading a retreat for Marian consecration. I leapt at the promise that it would be a game-changer and decided to participate.

If to consecrate means “to set aside for a particular purpose,” what does it mean, exactly, when the term is applied to our relationship with Mary? Put simply, Marian consecration is an entrustment of oneself to Our Lady. But if that “simple” idea still sounds vague and mystical, know that consecration involves the following concrete steps:

As Catholics, we recognize that when, from the Cross, Jesus gave Mary to the disciple John, and John, in turn, to Mary, Jesus made her our spiritual mother. As such, Mary’s equipped in a special way, over and above all the other saints in heaven, to lead us to holiness. “Mary’s task is to give spiritual birth to Christians, to feed and nurture them with grace, and to help them grow to full stature in Christ.” Fr. Michael Gaitley writes, in his popular guide to Marian consecration, “33 Days to Morning Glory,” “In short, Mary’s job is to help us grow in holiness. It’s her mission to form us into saints” (25).

RELATED: I Never Connected With the Rosary… Until I Became a Mother

Moreover, Fr. Gaitley explains that Mary is united to the will of God more closely than any other human being throughout all of time. If we want to know and follow the will of God in our own lives, there’s no better person to entrust the care of our souls to than Mary herself. A friend of mine once said, “The question isn’t really, ‘Why should you consecrate yourself to Mary?’ but, ‘Why shouldn’t you?’”

But does that mean that we’re making Mary more important than God Himself?

I can see why it might seem that way, especially to someone who’s new to the idea of consecration. But the answer is an emphatic no. Mary’s goal, while alive, was simply to live in union with God, and now that she’s in Heaven, she has the same goal for each of us. If we consecrate ourselves to Mary, it’s not with the intention of replacing God but rather, of allowing Mary to bring us closer to him, as other servants of the Lord, committed to doing his will in the world.

Okay, this sounds good, but where do I start?

Since there’s a particular kind of preparation associated with making a consecration to Mary, you’ll need some guidance through the process. If your parish hosts small groups for Marian consecration, you might find it helpful to join one, because of the benefit of being able to pray and process your reflections with others. But you can also make it by yourself!

Either way, you’ll need a book. If you want to go “old school,” you can use St. Louis de Montfort’s “True Devotion to Mary,” but I prefer Fr. Gaitley’s conversational, approachable style in “33 Days to Morning Glory” (which I’ve already cited above). He does a great job of breaking down consecration into related themes that build on one another, and offering short prayers to meditate with each day. Plus, he organizes each week of the retreat according to the theology of a particular Marian saint: Louis de Montfort, Maximilian Kolbe, Mother Teresa, and John Paul II.

At the heart of any Marian consecration, though, is a total gift of ourselves to Mary: an offering of all of our prayers, intentions, works, sacrifices, and gifts, for her to use as needed to help form us into saints.

I consecrated myself to Mary for the first time on the Feast of the Immaculate Conception in 2016, and have since re-consecrated myself (you can renew the offering as many times as you’d like!) twice more — in 2017, on the Feast of Our Lady of the Rosary (October 7) and in 2020, on the Feast of the Visitation, which also fell on Pentecost (talk about a perfect day for a consecration, combining a Marian feast day with the celebration of the Holy Spirit’s descent!). Each time, I’ve felt myself grow in my own understanding of how Mary wants to be a mother to me, and of how she leads me to her son. Most of all, I’ve grown in a spirit of trustful abandonment regarding God’s will for my life, as I’ve prayed to emulate Mary’s fiat. Last year, I purchased a bracelet to remind me of my consecration, and I wear it each day as a tangible reminder of the offering I’ve made and of Mary’s unceasing care for me.

If there’s one thing I recommend that you do for your faith life this May, particularly if you’re serious about becoming a saint (as we all should be!), it’s consecration to Mary. You won’t regret it.