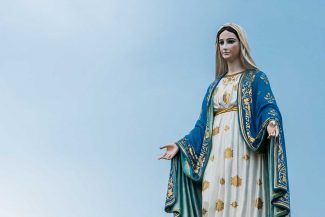 One thing that makes the rosary one of my favorite devotions is that it is essentially a scriptural prayer. This is true in two ways: Not only does it reflect on the life of Jesus, but the prayers we repeat — Our Father, Hail Mary, Glory Be — are all based in Scripture. And deepening our understanding of the scriptural roots of these prayers will allow us to pray them with greater depth.

Because the Old Testament was originally (mostly) composed in Hebrew and the New Testament was originally written in Greek, there are many points of subtlety and depth in scripture that are often lost in our English translations. Few of us will have the time or inclination to go learn ancient Greek to discover these hidden treasures ourselves, but many study Bibles will point out these gems for us.

Let’s focus on just one short passage, which also happens to be the root of one of the central prayers of our faith: Luke 1:28, which says: And coming to her, he said, “Hail, favored one! The Lord is with you.” This is the verse from which the beginning to the “Hail Mary” is formed. What can the Greek text of these verses tell us about this prayer?

The very first word conveys much. At the Annunciation, when the Archangel Gabriel comes to Mary to deliver God’s good news of the Incarnation, he greets the Virgin by saying, “Hail!” The Greek word in the text is chaire. We’ve grown so used to the phrase “Hail Mary” that its oddity passes us by. When do we ever use a word like “hail” to greet someone?

This is our clue! This word “hail,” chaire, was used only for noble or royal persons, like the emperor or a king. In the only other places where this word occurs in the New Testament, it is addressed to Jesus when he is called “king” (Matthew 27:29, Mark 15:18, John 19:3) or “rabbi” (Matthew 26:49, when Judas betrays him). It would be as if someone came up to you and addressed you as “Your Majesty.” The fact that the angel of the Lord greets Mary with this word tells us that she is a very important person indeed!

The next words in the prayer, “full of grace,” tell us just why she is so very important. The Greek text has the word kecharitomene. At the center of this compound word is the word charis, which in Greek can mean: grace, favor, loving-kindness, good will, thanks, reward, and loveliness. At first glance, we might attribute this favor to the privilege of being chosen as the mother of the Son of God. Yet the word indicates a deeper meaning. The prefix ke- indicates a past action that has been completed and the effect of which continues into the present. Thus, for Mary to be kecharitomene is for her to have been perfected in God’s grace and favor in the past and for that effect to remain.

RELATED: What Is the Immaculate Conception?

This is what we refer to in Mary’s Immaculate Conception. This is why in the ancient Latin version of the Bible known as the Vulgate, St. Jerome translated kecharitomene as plena gratia, “full of grace.” And this is why Mary would be greeted with the noble salutation chaire.

Knowing this, we can pray the Hail Mary with greater depth, asking that the young woman whom God has blessed might intercede for us, that we might be granted the grace to share in her reward.