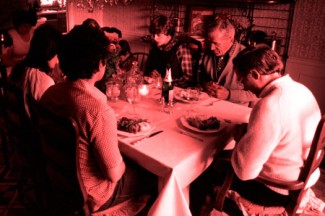 When I recently learned from a Huffington Post headline that Mary’s Gourmet Diner, a North Carolina restaurant, offers customers a 15 percent discount for praying before meals, my reaction was a tough-to-contain internal eye roll. From my perspective, public displays of religion tend toward showy obnoxiousness, usually having more to do with glorifying one’s own sense of goodness and piety than with glorifying God.

Doubling down on my judgment, I considered that praying for financial gain sort of flies in the face of Jesus’ “you cannot serve both God and money” warning.

“And when you pray, do not be like the hypocrites, for they love to pray standing in the synagogues and on the street corners to be seen by others. Truly I tell you, they have received their reward in full. But when you pray, go into your room, close the door and pray to your Father, who is unseen. Then your Father, who sees what is done in secret, will reward you.”

But then I read the article. I read the article and realized that Mary Haglund, the diner’s owner, was not doling out dough to anyone doing the sign of the cross or extravagantly demonstrating their Christian bona fides. She was not even limiting her generosity to people engaged in what we typically deem “prayer.”

I was humbled by her simple, apparently unbiased, benevolence. It was not just for Christians. It was not even just for religious people. As she said, gratitude is “good for everyone!!!”

She explained herself in a Facebook post after the news of her restaurant’s special offer went viral.

I will say that it [the 15% discount] is not a ‘policy’, it’s a gift we give at random to customers who take a moment before their meal. This could be prayer or just a moment to breathe & push the busyness of the world away. Who you talk to, or meditate on etc., is your business. I have lived in a 3rd world country, there are people starving. We live in a country with an abundance of beautiful food. I NEVER take that for granted. It warms my heart to see people with an attitude of gratitude. Prayer, meditation, or just breathing while being grateful opens the heart chakra. It’s good for everyone!!!

Besides being thrilled with Haglund’s use of the word “chakra,” I was humbled by her simple, apparently unbiased, benevolence. It was not just for Christians. It was not even just for religious people. As she said, gratitude is “good for everyone!!!”

Moreover, I realized any kindness that is non-discriminatory — which Ms. Haglund’s seems to be — is really none of my business. As long as I am quoting Gospel passages, I might be wise to go with the Parable of the Workers in the Vineyard in Matthew 20.

“Don’t I have the right to do what I want with my own money?” the landowner asks those who labored longest and feel disgruntled at receiving the same wage as those who worked for far less time. “Or are you envious because I am generous?”

There is enough to be offended by in the world without adding generosity to the list.