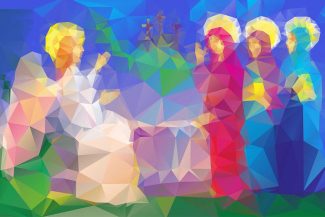 In almost every corner of this world and in almost every epoch of recorded history, women have been entrusted with the care of bodies. We birth them. We feed them. We wash them. We mend them. We comfort them. We fret over them. So it is nothing short of utterly unremarkable that it is women who arrive at the tomb of Jesus to anoint him for burial. It is obvious. It is commonplace. The women who fed him and washed him and looked after him in life come to care for his body one last time. And this is where the story is transformed. This is where it ceases to be ordinary.

The earth shakes. The stone in front of the tomb is rolled away. The body of Jesus is not there. He is risen. He is risen, indeed.

Resurrection is absolutely central to the Christian faith. If the Resurrection does not happen the Church is little more than a failed movement of individuals of questionable moral character whose megalomaniacal leader is subjected to a painful demise as a warning against further insurrection. End of story. The Resurrection means that Jesus is precisely who he claims to be and that he has accomplished precisely what he intended to accomplish. It means that for one brief moment in human history God walked among us to teach us about the Kingdom of God and to show us how to live it into being by acts of justice, mercy, and unflinching love. It means that we are loved so fiercely and with such abandon that death and brutality and evil are conquered. It means that we are not mourning the end of something but anticipating the beginning of something new … the Reign of Love made manifest and complete and resplendent here on earth.

The women coming to tend to the body of their Lord and Teacher and Friend came to mark his end with one last act of tenderness. What they find instead is a new beginning. It is these women who have walked with Jesus from Galilee to Jerusalem who are the first witnesses to his Resurrection. It is these women who have stood at the foot of the Cross and who (unlike some Gospel accounts of their male counterparts) did not hide from the danger of being associated with Jesus and who did not abandon him in his final hour who are rewarded with the first glimpses of their risen Lord. They were witnesses to his teaching and healing. They were witnesses to his torture and execution. They are witnesses to his triumph … his ultimate and paradigm-annihilating triumph over death and brokenness and everything that could ever claim to come between us and God. He stands before them — his body transformed and brilliant — and commissions them to start telling the world about what they have seen.

Like these women, all of us who claim Jesus as our Lord and Teacher and Friend are called to do the same. We are all called to be bearers of good news in a dark and troubled world. The truth of the matter is that there are still women witnesses to the Resurrection wondering this world. Like the first women at the tomb on Easter morning, they have beheld cruelty, brutality, and despair. They have also been gifted with a vision of triumph and transformation and they have been compelled by the same commission to share this precious vision with others.

Women like Ellen Johnson Sirleaf, Leymah Gbowee, and Tawakkol Karman, winners of the Nobel Peace Prize, are Resurrection Women. Ellen Johnson Sirleaf is the first woman to be democratically elected president of an African nation. After coming to the United States to complete her undergraduate and graduate education at Harvard University, she returned to her native Liberia to work for peace and prosperity for her people. She was not silenced by threats of violence. She was not silenced by imprisonment. Her leadership has been instrumental in the rebuilding of war-torn Liberia and the first steps toward healing for its people. Leymah Gbowee, also from Liberia, united Christian and Muslim women to protest the wars waged by dictator Charles Taylor. She refused to be ignored. She refused to abandon the women and children who had been brutalized and displaced. She worked to rehabilitate former child soldiers. Tawkkol Karman, a journalist and activist for peace in Yemen, has spoken out against the silencing of the press and the intimidation of journalists at great personal risk. She speaks with passion and authority. She works tirelessly and without ceasing and in the constant shadow of threats. These are Resurrection Women.