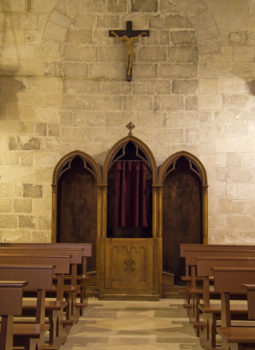 So, you want to go to Confession?

Yeah, I know. I never want to go either.

No one ever really wants to go.

It’s like getting a flu shot. There are a lot of excuses we can use for not getting one: I don’t like shots, the clinic is too far, I’ll get it tomorrow, it makes my arm hurt. Oddly enough, we dismiss the chances of actually getting the flu as a reason to get one.

When I stumbled back into my faith three years ago, one of the first things I did was go to Confession. Not because I wanted to.

I didn’t want to.

I pulled the whole “why I don’t need a flu shot” bit. I don’t like Confession, the church is too far, I’ll go tomorrow, it makes my pride hurt. Oddly enough, I dismissed my chances of actually sending myself straight to hell as a reason to go.

Prior to 2016, I maybe went to Confession two or three times in my life.

WATCH: Why We Confess

If you’re like me, you’ve probably thought a time or two, “I don’t need to confess to a priest right? I can just go straight to God.” The answer is yes, you can. And you should. You should confess to God in prayer regularly for your sins—right before you go to a confessional. Why? Because we are told to (John 20:21-23, Matthew 28:18-20, Luke 22:29-30, John 6:54, I Cor. 11:24-29), and besides, how can you improve something if you don’t really, fully realize how to fix it? Often, there is spiritual insight a priest can give to us that we’re too dense to figure out on our own.

After genuinely finding my way back to the faith, I promised myself not to wait that long again. Not because Confession is good for your soul, but because I never wanted to ever have to say some of the things I said again. Ever.

And I haven’t waited that long. Confessions these days are frequent, fast, and often the same boring things. And despite going to Confession more in the last two years than I did my entire life, I still forget to remember that stupid eraser.

Even now, sometimes I sit outside the confessional waiting for my turn, sweaty palms clenching my Rosary and knees on auto-shake. My offenses were nothing like those 17 years where I was morally all over Hell and half of Georgia, but the difference now is that I know better and can do better. But I chose not to. I tell myself it’s silly for me to feel nervous. I know what to expect. It’s not my first reconciliation rodeo. Still, pride is a powerful beast.

Here are some tips for going to Confession:

Do an examination of conscience first

On yourself. As humans, we are excellent at being judgmental. Don’t use this time wasted on someone else’s imperfections because you’ll have to confess that too. Spend some time on your examination and really get to know your areas of weakness. The Laudate app has one built in if your phone is more convenient.

There was no way I could remember everything. I just rolled down the list of items and let the priest sift through what he thought was most important. When I got home, I burned the list in a jar as a way for me to let go of the sins I just confessed. Because no one gains anything from not letting go.

Look for the person in line carrying multiple folders

That should make you feel better. Just kidding. Remind yourself that everyone else is there to do the same thing.

God already knows what you did and most confessionals have screens. So, unless the priest has known you forever, he won’t know who you are. Besides, he has probably heard a lot more scandalous things than what you’ve got. His job is to help you find your spiritual path. Every priest is different, and in my experiences, each one has offered something unique to help me spiritually, even if it didn’t seem to make much sense to me at the time.

Thankfully, flagellation is a thing of the past, so it’s a safe bet that you’ll just get some prayers to do as penance. Still, take the time to do your penance and meditate on what you’ve been asked to do. Often, the answer to uprooting our sin can be found in our penance.

RELATED: Going Back to Confession

Confession is good for the soul. Sure, it can also be intimidating and embarrassing—although you probably won’t die of embarrassment in the confessional. I say “probably” as a disclosure because we all have a finite amount of time on Earth, and I don’t know when yours is up. But Confession is also healing, peaceful, and renewing.

My faith is a constant work in progress, but I now use Confession as a means to help me be where God wants me to be. Not because I always want to go, but because I need to go, and because it’s available to me. The power of Confession is enough to change your entire course of life.

Maybe one day I’ll even remember the elephant eraser.