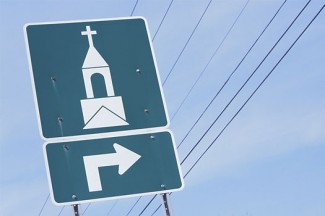 Today, January 13, marks the Feast of St. Hilary of Poitiers. (Go ahead and say “Poitiers” a couple of times. It’s delicious. I’ll wait.) St. Hilary was born sometime around the end of the third century in the city of Poitiers in what is now France. The son of pagan parents, he possessed a profound longing to understand the meaning and purpose of human existence. Hilary had an unquenchable desire to contemplate life as a gift and to discover its Giver. His lifelong spiritual journey took him to the great philosophers and he became a Neo-Platonist. By what St. Hilary described as chance, he stumbled upon Sacred Scripture. Within those divinely inspired words, he encountered the Gift-Giver he had been seeking. Along with his wife and daughter, St. Hilary was baptized and received into the Church.

This is not the end of Hilary’s journey. In many ways, this is the beginning. Despite the fact that he was married and despite his ardent protestation to the contrary, he was elected Bishop of Poitiers. With his ordination he was thrust into one of the greatest theological controversies in the history of the Church. He fought tirelessly against the wildly popular, widespread, and empirically championed Arian heresy. Arianism, very simply stated, was a heresy that posited that Jesus was not God. Arius, a priest from Alexandria in Egypt, taught that Christ was not truly divine. He was a created being. He had some of the attributes of God, but was not God. There are not three distinct, coeternal, and coequal members of the Trinity. There is only God the Father. Arius imagined Christ to be a sort of demigod.

During St. Hilary’s time, this heresy was not a small, marginalized movement. It had swept through the Christian world and claimed bishops and even the emperor as followers. The orthodox position (the one we affirm every time we pray the Nicene Creed — God from God, Light from Light, true God from true God, begotten not made, consubstantial with the Father…) was considered by many to be a fringe position … an antiquated absurdity. St. Hilary (along with St. Athanasius) battled tirelessly to preserve the orthodox understanding of Jesus as fully human and fully God. Hilary was exiled for his persistent defense of the faith. Eventually the First Council of Nicaea was called in 325 and the bishops upheld the orthodox understanding of Christ’s divinity and humanity. (The next time you’re at Mass pay attention to the language of the Nicene Creed … it is a purposeful rejection of Arianism and an articulation of the faith of the apostles.)

So, why does any of this matter? What does the life of a saint who lived nearly 1,800 years ago on the other side of an ocean in an empire that no longer exists battling an ancient heresy have to do with you and me and all of us trying to live our faith in a world of iPads, globalization, and social media?

A lot. At least I think so.

St. Hilary, like so many of us, was a seeker. His quest for meaning led him to the Catholic Church. Once he became a member of the Church, he was called to defend the faith. St. Hilary reminds us — converts, reverts, seekers, and cradle Catholics alike — that our spiritual journey does not end when we find our way home to the Church. The One whom we had been pursuing and who pursues us without ceasing calls us to holiness. It is not enough to be IN the Church. We are called to BE the Church. We are called to be fierce guardians of the holy and mysterious scandal that is Christ. We are called to bear witness to the reality that God obliterated the line between mutable and immutable, vulnerable and omnipotent, mortal and immortal, human and divine in Christ. We are called to give joyful testimony that this obliteration is an act of the God of love who wants to be close to us for all eternity.

It matters who we say Jesus is. It matters profoundly. Because when we proclaim that the God of the universe became human and took on the flesh of a newborn who shivered and cooed and cried and felt pain and loss and joy and hunger and friendship and tiredness and comfort, we proclaim our own dignity. Our human dignity. The human dignity that belongs — without exception — to every member of the human family. Jesus, our Almighty God and our human brother, is the center of our faith. Like St. Hilary, we must remind the world who our God is. He said of the proponents of Arianism “they did not know who they were.” We must remind the world who we are. We are bearers of the divine image. We are the beloved ones of our God. We are — all of us — made for holiness.