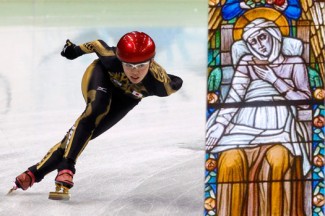 A life of faith does not mean a life free of suffering. Whether through the lessons of the Cross or the hard knocks that are an inevitable part of existence, it is a given that often we must pass through dark valleys to reach green pastures.

St. Lidwina is an overwhelming example of this. Born in 1380 in Schiedam, a town in what is today the Netherlands, the Dutch saint had a Marian devotion from a young age. She often prayed before her town’s shrine to the Holy Mother for entire nights. On one such evening, she is said to have had a divine revelation of the pain that would become one of the defining characteristics of her life.

Around the time she was 15, Lidwina fell while ice skating with friends. In the process, she broke a rib that would never heal and began the long journey of severe physical hardship that would only end with her death nearly 40 years later. Her injury is the reason we recognize her today as the patron saint of ice skaters.

Her incapacitation included excruciating headaches, nausea and dehydration. Eventually, she developed gangrene, and her ailment spread throughout her entire body. She went through the remainder of her life — she died at 53 — bedridden and in pain, with her final seven years spent blind. Parts of her body fell off, and blood discharged from her mouth, ears and nose. As if this were not enough, she also experienced stigmata which, however much a gift of the Spirit, surely augmented her suffering. In modern history, she has been recognized for having had one of the first known cases of multiple sclerosis.

Lidwina’s anguish was not limited to physical matters. Suspicious of her grotesque deterioration, some visitors and townspeople suggested she was plagued by the devil.

In spite of her agony, St. Lidwina remained devout. She prayed almost constantly and continued experiencing visions, with a number of miracles being reported at her bedside. As Jesus had, she willingly accepted undignified suffering with dignity.

What can we learn from Lidwina’s example? Perhaps that the patient bearing of trials sometimes requires more patience than we ever thought imaginable. Lidwina’s ordeal lasted 38 years.

Maybe her lesson is that adversity is not necessarily a sign of God turning away from, or giving up on, us. No matter what we believe about the extent of a higher power’s role in the specific events that happen in our lives, our toils have the potential to deepen our perspectives. For Lidwina, her commitment to God paradoxically seemed to increase with her torment.

While it may be vain for us to hope for her level of courage and trust, these are not the only fruits of tribulation. Some of the most empathetic people are those who have struggled most in their own lives. One need not look far to discover accounts of personal difficulty opening a person’s eyes to others’ pain. Christian author and speaker Brennan Manning once said, “What made Jesus Christ the greatest lover in human history is that he really knew what hurt people. When you read in the Gospels that Jesus was moved with compassion, it is saying that his gut was wrenched, his heart torn open, the most vulnerable part of his being laid bare.” As unpleasant as this may sound, it is surely better than an alternative of apathetic indifference.

Lidwina also reminds us that because all things must pass, the moment at hand is what truly counts. Instead of falling into despair with the knowledge that her health would soon be taken from her, Lidwina enjoyed what she had while she had it. Her last moments of wellness were spent in activity. None of us know when we could lose any of our gifts, so we would do well to take after Lidwina and use them while they are here.

Lidwina’s life may also teach us that having physical or mental shortcomings or restraints of any nature does not necessarily bar us from greatness. Whether it is Lidwina dedicating herself to an almost monastic prayer life despite her disease or Helen Keller allowing her disabilities to drive her to an inspired life of activism, our limitations may be less limiting than they seem. They may be not only part of a reality we can to some degree transcend, but the very instigators of our growth.