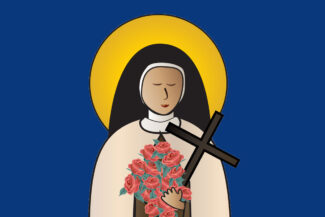 On the morning of Good Friday, 1896, St. Thérèse of Lisieux woke up coughing. As she pulled the handkerchief from her mouth, she found it soaked in blood—tuberculosis. In those days, a tuberculosis diagnosis meant a certain long and painful death. As St. Thérèse took to her bed, her Mother Superior, (who was also her blood sister) suggested she serve God by writing her spiritual biography. For the next year and a half, she wrote down her most intimate thoughts on faith, the Church, and, most of all, her deep love for Christ. This autobiography would become “The Story of the Soul,” the memoir of a young woman’s internal faith life, which not only inspired the world but made her a saint.

This month, as her saint day (October 1) approached, I joined a small group of parents gathered at St. Thérèse Catholic Academy in Seattle, to learn more about the patron saint of our sons’ school. We introduced ourselves by name and shared a saint who we have identified with. I shared St. Peter, the Saint with a wicked temper, but a heart full of love. Those who knew me laughed at the obvious connection. One mother explained that in her home growing up, saints were her family’s heroes and heroines, her family told the stories of saints as some might tell tales of superheroes or sports figures. A father shared how he was instructed by Franciscans growing up, which instilled in him a devotion for St. Francis. He strives, as St. Francis, to be an instrument of peace, even in his work as a musician. Another shared that it was Mary she most identified with as a woman, as a mother, and as a person who had suffered grief.

RELATED: My Virtual Camino: Celebrating the Feast of St. James in My Own Backyard

Then we listened to the story of St. Thérèse. How, as a young girl, she lost her mother to breast cancer. How she suffered from what might now be referred to as panic attacks when her older sister, who was a second mother to her, left to join the convent. How she found solace and comfort in the eyes of Mary after her family placed a statue of the Holy Mother in her room and desired to be a nun as a young girl. How she took a pilgrimage to Rome to ask Pope Leo XIII to allow her to join the Carmelites though she wasn’t old enough. When she didn’t receive a concrete answer, she refused to leave his feet until the Swiss Guards dragged her away. We heard how she suffered what St. John of the Cross called the “dark night of the soul,” as she lay dying at 24, unable to feel God’s presence until the very end. It wasn’t until her death, when her Sisters read her memoir, that they came to know the rich inner faith life of this young nun. Her story inspired them enough to share it with others.

As we readied to leave the small group, one parent said aloud, “What I take away from St. Thérèse is that we all have a story of faith to share.” We nodded in agreement as we remembered our introductions. I’d known these parents for years as our children have grown up together, yet I didn’t know them on a deeper, more spiritual level.  As I listened to each of their stories, I realized how much we have in common. How, many times, we were walking through the same situations with our kids, with our health, with our families. I was encouraged. I knew I wasn’t alone. I saw glimmers of hope when I heard how God had answered their prayers. I knew He’d answer mine too. We all felt God’s presence through hearing those stories. We saw where God had been working in our lives and how that connected us to one another, making us a stronger community.

RELATED: Getting by with Help from a Little Flower

Another parent said aloud what we were all thinking, “I want to hear more of these stories.” St. Thérèse had shown us the way. She had no inkling of the impact she would have by sharing her life story. Not just for a handful of parents on a school morning but a whole Church. Who knows how God will use our stories of faith?