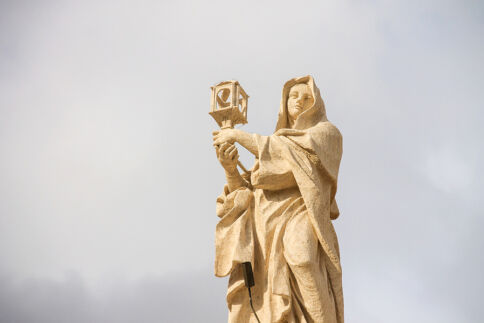 “Look closely, I say, to the beginning of the life of this admired one, indeed at the poverty of him who was wrapped in swaddling clothes and placed in a manger. O marvelous humility! O astonishing poverty! The King of the angels, the Lord of heaven and earth is laid to rest in a manger!” – St. Clare of Assisi, Fourth Letter to Agnes

Two years ago, I was received into full communion with the Catholic Church as Advent began. I chose St. Clare as my confirmation saint for reasons that were largely intuitive at the time because of my previous community service experiences with Franciscans. Having gained more perspective since then as both a new Catholic and a young parent, I’ve found Clare’s devotion to simplicity particularly fitting to keep in mind as we approach the season of giving and gratitude.

Our culture often romanticizes generosity around the holidays by doing too much of everything. With small children, I am often confronted with temptations to maximize every moment, develop new traditions, and create picture-perfect memories. Instead, by embracing St. Clare’s example, I’m able to reconsider how to live generously in ways that are truer to the spirit of my faith’s humble Christian origins.

Clare knew these origins well; she contemplated them in solitude and encouraged others to do the same whenever she could. As I have grown in my faith the past two years, I have tried to learn more about Clare in order to discover how to integrate her example into my own life. Her original writings shed light on her devotion to Christ, while others have also written eloquently about her. In one of St. Pope John Paul II’s letters to the Poor Clares, the Franciscan order of nuns that St. Clare founded, he describes her as having a “spirit of poverty” that “emptie[d] her of everything but the simplicity of a gaze fixed on God.”

It can be hard to imagine that kind of austere intensity in our current environment. Particularly as we hope to begin to emerge from these dreadful pandemic days, it is far too tempting to make up for lost time in an excess of abundance: more commitments, more gifts, more time away from home. I have had to renew my focus by sticking closely to pre-planned lists and resisting the urge to feel pressured to match everyone else in material generosity. While even the Poor Clares made exceptions for Christmas and other feast days in their otherwise strict observances, their charism is a helpful reminder when we find ourselves biting off more than we can chew by the time we move into December.

LISTEN: Saints of Our Lives: Saint Clare of Assisi

How did Clare keep her gaze on what she saw as the only thing that truly mattered? By never looking away from where the Christian faith began. In her writings, she frequently discussed the Christ Child and Mother Mary. In them, she saw the heart of the Christian life that could best be nurtured through constant prayer and focus, ultimately hoping to become a “mirror” that reflects “eternity.” Both her Rule and Testament and her letters to Agnes demonstrate an unwavering focus that enabled her to use her time as effectively and efficiently as possible. Because of this single-mindedness, the Poor Clares were able to serve their community far more than we might naturally assume. Clare’s physical separation from the outside world did not prevent her from helping those in need; instead, by seeing her vocation as a gift, she was able to offer herself as a gift to others in a fully authentic way through prayers and even healing. Most famously, her devotion to the Blessed Sacrament once saved her Sisters from an invading army.

These insights into Clare’s life again bring us back to Mary, our Mother — a fitting focal point as Advent approaches. Mary knew well what it meant to empty herself for the sake of Jesus and, ultimately, for the world. Through Clare’s example, I am humbled by the reminder that the spirit of Advent can serve as a sort of ongoing spiritual compass for our entire lives as Christians, looking to Our Mother and the Son of God and their patient endurance as constant models for how to grow ever more consumed by their guiding light.

And so now, we prepare to wait also for Christ. We gaze upon his face as Clare did, awestruck as ever that God chose to become man. What better time to be reminded that that is all that ever matters? As we approach the season of waiting and giving, we can keep these truths in mind to guide our hearts toward generosity. We can let go of the impulse to do too much and forgive those who do not know how to do otherwise. When relatives give my young children far too many presents, I can try to see the grace that’s intended instead of allowing myself to feel weighed down with the constant pull of stuff. I can make an effort to bake cookies for gifts and write my thank you notes before Valentine’s Day, grateful for the chance to return the love I have received. In all things, we can seek Clare’s “holy simplicity” wherever we go.