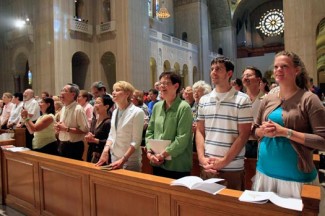 If you’re headed to Mass during the upcoming Advent and Christmas seasons, you’re going to notice some changes. Starting November 27 the Roman Catholic Church will be using a new set of instructions for celebrating Mass — all part of the newly revised Roman Missal (the 3rd Edition, in fact!). This new translation contains revised prayers for both the priest and the assembly. Don’t worry, not all the prayers are changing, but there are some significant changes you should know about.

At the beginning of Mass, the priest makes the Sign of the Cross and greets the people by saying, “The Lord be with you.” In the new translation, the assembly will respond back to the priest, “And with your Spirit!” This response is a literal translation from the Latin phrase, “Et cum spiritu tuo.” Have you ever celebrated the Mass in another language? If so, then this change might not be a big deal because most languages already use a literal translation of the Latin phrase (for example, in Spanish the phrase is translated “Y con tu espiritu”). One reason for this textual revision is because this response is more than just a greeting. This response is also a spiritual exchange between the priest and the assembly, explains Joe Paprocki of Loyola Press. The priest extends a greeting of the Lord’s presence and the assembly grants a similar greeting inviting God to be with the presider as we worship together. Of all the liturgical changes, this one may be the easiest to remember, because we say it four times throughout the Mass: at the beginning of Mass, before the Gospel, before the Eucharistic Prayer, and at the end of Mass. For more information, visit Fr. Dylan James’ blog on the new translation.

Liturgical composers have been hard at work revising their old Mass settings and composing new ones for use with the revised Missal. One big undertaking for composers was the Gloria, the prayer of praise we sing as part of the Gathering Rite. There are many minor textual changes to this prayer. Here are two: At the beginning of the prayer, we will now sing, “Glory to God in the Highest and on earth peace to people of good will!” (Luke 2:14). This particular revision is an example of how the new translation relies heavily on scripture. The second change occurs later in the Gloria when we sing together, “We praise you, we bless you, we adore you, we glorify you, we give you thanks for your great glory!” This five-fold invocation of praise poetically expresses the majesty and glory of God.

Listen to the new musical Mass Settings of the Gloria:

In the early Church, when people entered into the Body of Christ through the sacrament of Baptism, they made an expression of faith, a credo (which in English means I Believe). This expression of faith was a series of questions that the person seeking entrance into the Church had to answer, “I do.” Today, as we celebrate the Sacrament of Baptism, parents (of children) and adults (who enter through the process of RCIA) are asked that same set questions and they respond in the same way: “I do.” Every Easter, we, as the Body of Christ renew our Baptismal Promises by responding, “I do.” And finally, every Sunday, we make this same profession of faith but in a different way. Most often, we profess the Nicene Creed (although some communities choose to profess the Apostles’ Creed). Currently, we begin the Nicene Creed by saying, “We believe” (and we repeat the same phrase throughout the creed). In the new translation, we will proclaim, “I Believe.” As you can see, this small change harkens back to when the person entering the Church says, “I do” in the Credo formula. So the change from “we” to “I” is more consistent with how we have professed our faith throughout history.

“Consubstantial?” That sounds like a great Scrabble word! This new way of saying “one in being with the Father” in the Nicene Creed means that Jesus is really divine. Yes, that’s right; Jesus was actually, fully, and wholly divine. Thus, when we say “consubstantial” we are expressing one of the most beautiful mysteries of our faith, that Jesus is God. For those of us who have not had classes in philosophy or Christology, this new term may seem difficult to understand (and even to say!). However, just remember that “consubstantial” is a literal translation from the Latin “Consubstantialem,” which means Jesus is indeed, “one in being with the Father.” Want to impress your friends with your new philosophical language? Here’s a link to more history on the evolution of the term consubstantial.

#5: The centurion’s faith and our response

When he entered Capernaum, a centurion approached him and appealed to him, saying, “Lord, my servant is lying at home paralyzed, suffering dreadfully.” He said to him, “I will come and cure him.” The centurion said in reply, “Lord, I am not worthy to have you enter under my roof; only say the word and my servant will be healed.” When Jesus heard this, he was amazed and said to those following him, “Amen, I say to you, in no one in Israel have I found such faith.” (Matthew 8:5-8, 10)

This is another great example of how the new translation uses scripture to enhance our liturgy. In this Gospel story, the centurion begs Jesus to cure his servant by only saying the “word.” We, as the People of God, are called to model his faith. As the priest calls us to communion he beckons us, “Blessed are those called to the supper of the Lamb,” and we respond, with words that are similar to the centurion’s words, “Lord, I am not worthy that you should enter under my roof, but only say the word, and my soul shall be healed.” As we come to the Eucharistic table, may we approach with the humble faith of the centurion and carry this humility with us through our everyday life.

If you want to know more about why we have this new translation of the Mass and how it’s different from the previous edition, check out resources from the United States Conference of Catholic Bishops, Loyola Press, Liturgy Training Publications, and the Busted Halo Question Box. Also, seek out your parish priest or Liturgy and Worship Committee who will be able to help answer any questions.