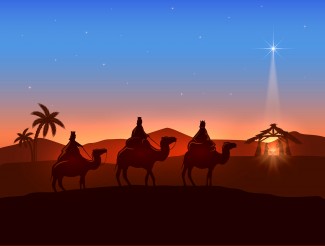 Although we rarely slow down to consider it, most of the time we live as voyagers moving about solely for the sake of discovering the next temporary provision. Our lives will certainly look a lot like that over the next few weeks as the Christmas shopping frenzy continues. We will scurry about, participating in the mad rush for that perfect gift.

I was on my own Yuletide expedition when I happened upon a nativity scene at the local “Stuff Mart” the other day and noticed the bearded travelers sitting before a baby with gifts in hand. The figurines left me meditating about these nomads of the Bible. They’ve been called astronomers, priests, and even kings. Some two thousand years ago, the pilgrimage of these three wise men was well underway at this point in the calendar year.

I picked up one of the sojourners and began to laugh. The figure reminded me of a picture I look to now and then when I think of nomads. It is a photo of a couple of 20th-century dudes with unusually biblical-looking beards who may pass for “wise men” on occasion (especially when they are sitting in close proximity to me). These two set off in the late 90s on their own nomadic journey, traversing American highways in an old Volkswagen van. They traveled about, working odd jobs, camping in exotic places, and collecting amazing stories as they went. My friends (one now an organic farmer and the other a college professor) hoped that their travels might be a life-changing, fulfilling experience. After all, their lives were now literally “a journey.”

They were kites without a string, that longing deep in their hearts to wander was finally being realized. But somewhere out there on their “Kerouacian” trip, the truth became clear: The nomadic life was empty and shallow. Traveling for the sake of the journey was a hollow expedition.

They finally parked their van and spent months working with the homeless, the poor, and the drug-addicted at a mission on Skid Row in Los Angeles. My friends’ lives were transformed, not by their aimless wanderings, but by something spiritually nomadic. It was the acceptance of responsibility and sacrifice they learned as they labored hours cleaning, serving, and walking among the lost and forgotten souls of 5th Street in L.A.

Both of them can still be moved to emotion as they reminisce, not about camping under the stars on mountaintops, rather by the memory of ministering to hopeless men. There among the brokenness and poverty, my bewhiskered friends came face-to-face with a real King, a Holy Nomad, who gave purpose to their lives. They learned that joy and meaning are found not by wandering, but by following.

Talk of “the journey” resonates in our hearts because we were created to be nomads. Advent is upon us, and I considered this as I gently placed the figurine back into his scene on the end cap. If he could talk, I think he might explain that their journey wasn’t about the lush hillsides, the breathtaking terrain, starry nights, or beautiful landscapes. It wasn’t the meals he ate or the company he was afforded along the way. It was not the perfect brand of sandals that allowed him to tread those miles or latest Polartec robe that kept him from the elements. I am sure he might assert that it wasn’t even about the gifts he and his companions carried of gold, frankincense, and myrrh — the best that money could buy.

I think he would tell us that the true purpose of his nomadic life became clear as he found the “authentic” King, lying in a manger underneath that bright star. There in a stable on the outskirts of a poor and forgotten little town, among oppressed and broken people, his intention to follow enabled him to discover true meaning and joy: the Holy Nomad, whose cries would awaken new purpose into the world.

You and I spend this time of year in search of many things: the hottest technological gadget, the closest parking spot at the outlet mall, the best Cyber Monday deal, the perfect tree, the right guest to bring prestige to our holiday get-togethers. But do we expend the same effort seeking the very One whose birth signifies the movement toward self-sacrifice and responsibility? Do we search for the God who climbed into human skin and walked the neighborhood among us?

Advent comes upon us as it did my friends at the mission, as it did for the wise men as they fell to their knees before the Christ child. The truth of the spiritually nomadic life is that we are meant to follow the One who calls us to come forth toward Him. Joy and meaning are found in moving forward to follow. I love the Tolkien quote, “Not all those who wander are lost.” The season of Advent reminds us that the truly wise are those who seek to kneel before the King.