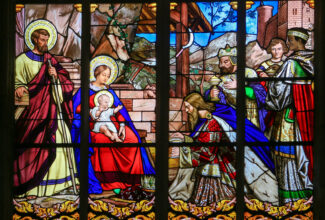 According to legend in Western Christianity, there were three “wise men” who visited Jesus after His birth, bearing gifts. Their names were Melchior, Caspar, and Balthasar, and they were of various ethnic/racial origins. However, Matthew’s account of the magi’s visit in the Gospel (which is the only reference in the Bible to these famed visitors) tells us none of these characteristics.

There are other details about the wise men that remain mysterious. Because Matthew tells us that the magi brought Jesus gifts of gold, frankincense, and myrrh, popular imagination has pictured three gift-bearers, although Matthew didn’t say how many magi made the trip. It was later tradition, not Matthew, who named the magi. A Greek manuscript dated to about 500 A.D. lists the names of Melchior, Caspar, and Balthasar, labels that have been maintained in Western Christianity.

Other Eastern Christian churches have ascribed other names to these figures. For example, in  Ethiopia their names are Hor, Karsudan, and Basanater. Finally, Matthew’s gospel doesn’t specify where the magi originated from, except to say that they came “from the East.” The East could have been Babylonia or Persia, although later legends imagined them traveling from destinations as far as India and China. With many possible origin countries, it’s quite likely that the magi had a variety of skin tones.

Ultimately, we simply don’t know how many magi there were, what their names were, or what color skin they had.